LGE, Microsoft may tie up on smartphones


Eyes are on the possibility of Microsoft’s chief executive Steve Ballmer holding a meeting with the chief of LG Electronics, as the U.S. software giant chief is expected to visit Seoul this month.

Industry sources said Ballmer is likely to engage in business meetings with local industry representatives, including LG and its platform developers, as he is coming to speak at the Seoul Digital Forum on May 22.

“Ballmer, who will speak about the ‘new era of technology,’ will be staying for a day in Seoul,” said a Microsoft Korea spokesperson Lee Seung-yeon. “We, however, don’t have the fixed details of his business meeting schedule as of now.” 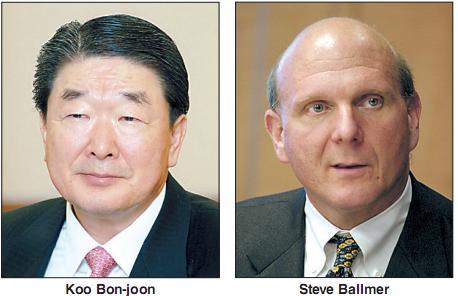 An LG spokesman also said it is yet unaware of the meeting.

The executive also said LG is taking a step back from Windows phones powered by Microsoft’s platform, adding that it would “continue research and development efforts” on Windows Phones.

“The total unit of Windows Phone sold in the global market is not a meaningful figure,” said the LG spokesman, further elaborating that it currently has no plans of rolling out another LG-manufactured Windows phone soon.

LG has maintained a good relationship with Microsoft with the country’s IT behemoth selecting Windows as its primary smartphone platform when LG’s then-chief executive Nam Yong was in office a few years back.

Announcing the expansion of their alliance to widely increase the figure of LG handsets running on the Windows OS, the two signed an agreement which would tenfold increase in Windows phone volume available in 2009 and present up to 26 new Windows phone this year alone.

“The Windows platform brings flexible and customer-friendly software that ties into the Web and the PC, giving our phones a wide range of new capabilities to address an increasing number of segments and markets,” said Nam.

The decision, however, was detrimental for LG which was once the world’s No. 3 handset maker, weakening its smartphone lineup.

As its mobile business unit’s performance failed to meet expectations, it recorded operating losses for seven consecutive quarters, with it jumping back into the black in the final quarter of last year thanks to its increasing sales of Android-based smartphones operating on the fourth generation Long Term Evolution network.

In the meantime, its rival Samsung Electronics, which also experienced difficulty in smartphone sales with the release of Apple’s iPhone, became the top smartphone manufacturer in sales volume with plans to roll out the new Galaxy S3 this month.

LG’s sluggish smartphone sales are somewhat in accordance with the market share of Microsoft’s Windows Phones.

According to Lee of Microsoft Korea, Windows Phones took up less than 2 percent of the global smartphone market share, which explains why its CEO Ballmer left out the latest details on it during the company’s earnings call earlier last month.

Claiming that the firm is “working to bring Windows Phone to more people,” he noted that Microsoft remains pleased with its Nokia partnership.