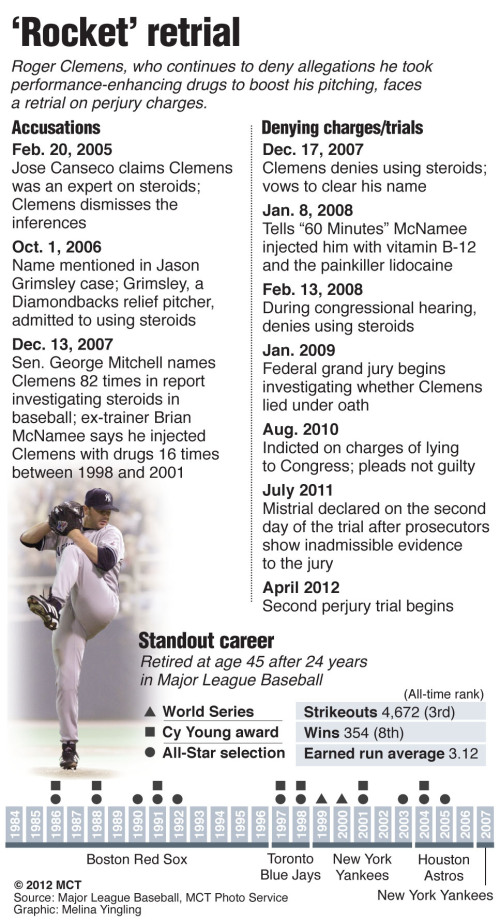 WASHINGTON (AP) ― The complexity of the Roger Clemens perjury retrial showed itself in many ways Monday ― before a jury that knows little about baseball.

The prosecutor’s hour-long opening statement was a rambling hodgepodge of dates and anecdotes that attempted to portray the seven-time Cy Young Award winner as a man who told lies and “other lies to cover up lies.” A ruling was issued about Clemens’ former teammate Andy Pettitte: He can testify about taking human growth hormone, but can’t say where he got it from.

In between, there were numerous motions as attorneys for both sides fussed over which words and facts can be used and which ones can’t. Finally, as the clock passed 5 p.m., an impatient U.S. District Judge Reggie Walton admonished both sides for making their cases too complicated for a jury to understand.

“Keep it simple. ... Boom! Move on,” said Walton, who then declared the slow-moving trial adjourned for the day as he abruptly left the bench. The opening defense statement was put off until Tuesday.

On the fifth day of the trial, the court finally seated 12 jurors and four alternates. The 10 women and six men mostly said they didn’t follow baseball or know much about Clemens. In fact, seven said they’d never heard of him.

Their first task was to try to digest prosecutor Steven Durham’s description of Clemens’ 10-year relationship with strength trainer Brian McNamee, which Durham said became a “story of deceit and dishonesty and betrayal” because Clemens wouldn’t acknowledge using steroids and human growth hormone.

“The end will show that he made his choice,” Durham said, “and he was going to lie.”

Clemens is accused of lying ― when he said he never used steroids or HGH during his 24-season career ― at a 2008 congressional hearing and at a deposition that preceded it. Last year’s mistrial was called after the government showed the jury a portion of videotaped evidence that had been ruled inadmissible.