A surging number of Korean corporations are dipping into the global labor pool in efforts to expedite their overseas operations and better reflect localized needs.

With their business fast expanding in emerging markets, LG, POSCO, Samsung and other gone-global firms are courting young and experienced talent overseas who are bilingual, ambitious and competent, and have an understanding of the industry and Korean culture.

The companies already have foreign nationals on their payrolls for executive posts, production lines and international projects. But their focus is shifting toward procurement, sales, marketing and other working-level, white-collar jobs at their headquarters, recruiters and industry officials say.

The majority of the newbies graduated from a Korean university or majored in Korean studies. Some of them have a passion for the country’s pop culture, or the Korean Wave, which has sparked a frenzy among young people like Zhao, who landed a job at a retail firm last year.

“My craze for Korean dramas and singers first led me to learn Korean,” the 26-year-old Chinese said, declining to give her first name.

“While majoring in Korean studies and traveling around the country, I became more interested in its amazing economic development and rapidly growing industries. Now I want to become an expert in that area.”

Zhao is one of the applicants for open recruitment projects targeting international students in Korea. Conglomerates including LG, CJ and Lotte, as well as smaller firms such as Ottogi and Noroo Paint & Coatings joined the crusade this year.

Corporations such as Samsung and Doosan are open to all nationalities, while others hire through internships. Around half of Doosan’s 39,000-member labor force is composed of non-Koreans who mostly serve its overseas units but get to work at the Seoul office, a group spokesperson said.
About 700 college graduates from 47 countries sought careers at Samsung Group during its regular recruiting period through March. The tally shot up more than fivefold in merely three years, according to the company. By nationality, Chinese took up the biggest slice with 200, followed by 100 Americans and 100 Canadians.

“Korea’s rapid emergence fascinated and led me to enter a Korean university,” a Nigerian applicant was quoted as telling Samsung officials. “When I went back home lately, many people were using Samsung products and saying they’re the best. I want to work for the best company.”

Lotte Group, a retail-focused chaebol, said it will offer special opportunities for those from countries including China, Russia, Indonesia, Vietnam and Malaysia as part of its plan to hire 1,000 people in the first half of this year.

LG Group chairman Koo Bon-moo orchestrated the conglomerate’s hunt for top-notch research and development staff by attending a conference last week in San Francisco for about 300 master’s and doctorate students in software, electrical and electronic engineering, material engineering and chemistry.

POSCO’s foreign employees are forecast to reach 3.5 percent of the new staff this year from 2.1 percent a year ago.

The steelmaker’s charity picks 30 students every year from China, India, Vietnam, Cambodia and other emerging economies to fund their studies in Korea. Foundations set up by Samsung, Korea Exchange Bank and Daewoong Pharmaceutical crafted similar projects.

“We opt to single out promising, young individuals in our target regions and nurture and train them (rather than select prepared ones),” a POSCO spokesperson said.

Smaller companies are playing catch-up with their bigger rivals. A January poll by the Korean Chamber of Commerce and Industry on its 303 small and mid-size firms hiring foreign workers showed that more than one out of two respondents said they want to expand their international workforce. 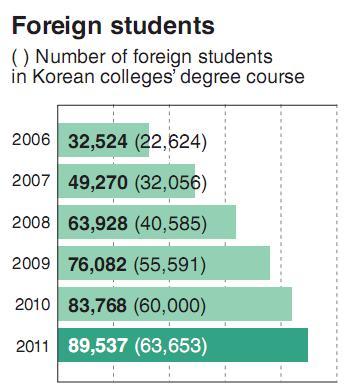 The trend is in line with a sharp rise in the number of international students here. Nearly 64,000 were pursuing a degree at universities nationwide in 2011, up a whopping 580 percent from some 11,000 in 2004, according to the Ministry of Education & Science Technology.

“There are two types of international students ― those who want to get a job here after graduation and those who want to return home. About half of them fall into the first category,” said an official with the Service Center for Foreigners at Dongguk University in central Seoul, citing her institution’s recent survey. 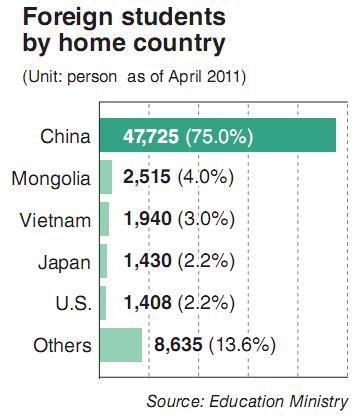 As of October, 1,230 students, 90 percent of whom are from China, enrolled at the private university’s undergraduate or graduate programs, she noted.

“Many SMEs relying on foreign employees for their operations are struggling,” said Park Jong-nam, an executive director at the KCCI. “The government needs to take their difficulties into account and consider a hike in the visa allowance.”

Other challenges remain at home. Youth unemployment is creeping up, reaching 8.3 percent in the first quarter. A mismatch between jobs and skills in the labor market is growing. Racism concerns arose following recent attacks against Jasmine Lee, a Filipina who is set to become the first naturalized Korean lawmaker.

Some experts also argue that Korea should tap into a higher quality labor pool, given its heavy reliance on an ample supply of an easily trainable, low-cost workforce from its fast-growing Asian neighbors.

According to the Ministry of Employment & Labor, nearly 720,000 foreign workers are officially employed by local firms as of September. About 49 percent of them are engaged in labor-intensive industries, while some 300,000 are Koreans with other nationalities.

As part of efforts to cope with their calls, the government said it plans to foster a more inclusive society and ramp up financial aid for SMEs that are seeking to court more skilled professionals from overseas.

“The government will boost support for counseling and help centers international workers and reinforce technical and entrepreneurship education for incoming ones,” Labor Minister Lee Chae-pil said at the end of last year.