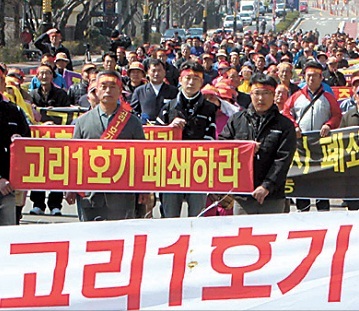 Korea on Friday proposed a sweeping overhaul of its nuclear industry to shore up its global competitiveness and restore public confidence in one of its biggest sources of electricity.

The plan, sketched out by the Ministry of Knowledge Economy, focuses on notching up safety of the country’s 23 reactors and rooting out recurrent breakdowns that stoked jitters in light of the Fukushima meltdown in 2011.

The measures were also designed to facilitate the government’s ambition to boost atomic power to 59 percent of electricity generation by 2030 from some 30 percent now and to spur further nuclear exports following a 2009 deal with the United Arab Emirates.

The four-pronged package calls for far-reaching safety tests, greater transparency in plant operations, higher capability and integrity of workers and contractors, and open communication with residents and private watchdogs.

“We’ve been somewhat rushing safety checks and maintenance because of power shortage concerns but we will expand the system from now onwards however long it takes,” Knowledge Economy Minister Hong Suk-woo told a news conference.

Under the plan, the ministry will launch a full-scale inspection on all the reactors until July and preemptively replace diesel power generators and other equipment at nine units older than 20 years.

To foster open, accountable plant operations, it promised to share as much information as possible by creating a website. Independent watchdogs will also be expanded to include not only local residents and municipality officials but also experts and civic groups, Hong said.

The ministry also plans to adopt an automatic alarm system in case of power cuts or other emergency cases, shifting from the current hand-operated scheme.

The new warning method comes on the heels of a recent cover-up of a 12-minute blackout at the Gori-1 unit in Busan, the oldest reactor here. Neither damage nor radiation leakage occurred but the incident triggered a host of rallies among residents fearing a more serious accident.

Under mounting pressure, the ministry and Korea Hydro & Nuclear Power Co., the state-run nuclear plant operator, have been scrambling to reassure Koreans of safety and the urgent need for atomic plants in resource-scarce Asia’s fourth-largest economy.

In a bid to drum up support, Hong and other senior officials visited Busan late last month to meet with the city’s mayor, council members and those living near the plants.

“Ethics is pivotal in atomic power. State-of-the-art technology without ethics is not worthwhile.”