Korea has seen an unprecedented concentration of wealth in the nation’s top 10 family-owned conglomerates since the global financial crisis in 2008, industry reports showed Monday.

Their combined market capitalization and sales reached their highest-ever last year, according to separate reports by Chaebul.com, FnGuide and the Economic Reform Research Institute.

The top 10 owner groups saw the market cap of their 90 listed affiliates increase to 648 trillion won ($577 billion) as of January, about 52.83 percent of the total 1,227 trillion won of the nation’s main bourse. 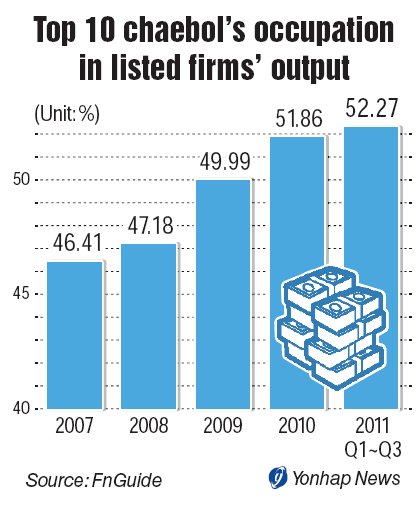 Even when the stock market suffered due to the sluggish U.S. economy and the widening financial crisis in Europe over the past six months, the figure rose from 52.06 percent to 52.83 percent.

Hyundai Motor Group recorded the highest increase from 3.81 percent in 2008 to 12.29 percent last month, while Samsung Group further increased its market dominance from 18.86 percent to 22.23 percent.

Sales at chaebol affiliates were also dominant across industries.

When including POSCO instead of Doosan in the top 10 conglomerates, the combined sales at their 82 listed affiliates amounted to 471 trillion won in the third quarter.

Such an economic concentration may be the result of their efforts to strengthen competitiveness in diverse sectors.

Major companies, however, have been criticized for abusing their market dominance without making efforts to share profits with the whole of society.

In a report by the Fair Trade Commission that analyzed the internal transactions among 55 top companies, 88 percent of the deals were secretly made among affiliates without competition.

More recently in early January, the antitrust regulator fined Samsung and LG, local electronics that have more than 90 percent of the market share, for fixing prices of their home appliance products.

“If the economic power is concentrated on a business group, the company could suffer more severely when hit by a crisis,” said Chung Un-chan, the former prime minister who is currently heading a panel on shared growth between large and smaller companies.

He warned of weakening of diversity and creativity with excessive economic concentration.

“It’s much better that 100 people produce products rather than only five dominate production activities. Companies should grow together.”

Chung, has pressed large corporations to share their “excess profits” with the small firms in their supply chains.

Industry watchers say chaebol may face more pressure for management reform efforts in the coming months amid moves in the political community to impose investment caps and more tax ahead of major elections.