A man in his 70s recently called up the hotline for the elderly in need of sex consultation at the Planned Population Federation of Korea. He was frustrated with his inability to make love to his wife.

Another 75-year-old man said he had lived with a woman after his wife died but he and the woman had since separated.

“It was great stress and I suffered from depression. The thing is, I still prefer living with a woman to living with children,” he said.

Is aging the end of one’s sex life? Can older generations enjoy sex like younger people?

In theory, yes. In reality, probably not.

According to a Ministry of Health and Welfare survey of 436 men and 64 women over the age of 65, they were as active and interested in sex as younger generations. Of them, 66.2 percent said they have an active sex life, 19.6 percent of those sexually active seniors said they used sex toys or aids, and 50.8 percent said they take pills to achieve erections.

“It is very natural for the elderly to be sexually active,” said Rim Choon-seek, a Hannam University professor and author of “Sex Never Gets Old.” 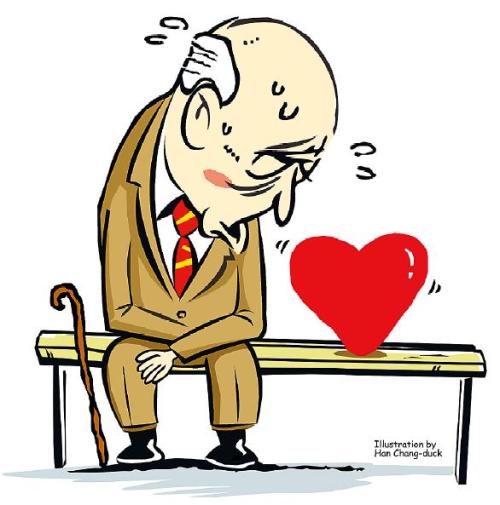 “When a man becomes old and is left in an empty nest only with his wife or only with his child or children, he usually becomes driven by a strong desire to be loved by his partner. But his children or younger people around him would advise them to remain abstinent, citing old age,” he said, “That kills him.”

Rim pointed an accusing finger at younger people who tend to downplay the value of sex for the silver generation.

Experts say that sex is linked to the wellbeing of senior citizens.

According to Professor Adrienne Jackson of Florida Agriculture and Mechanical University, the more often older married individuals engage in sexual activity, the more likely they are to be happy with both their lives and marriages. Of those who had sex twice or more a month on average over the past year, 80 percent said they were very satisfied with their marriage. Of those who had no sex, only 40 percent said they were generally happy.

Especially for widows, solitude feels deeper and is more detrimental to their lives as a whole. When seniors’ sexual desires are disregarded, their pent-up frustration could lead to problems with prostitution and sexually transmitted diseases.

According to a survey of 1,000 65-year-olds conducted by the Seoul Metropolitan Government in 2009, 16.2 percent had bought sex in the previous two years. The majority of them bought it five times or less, and 26 percent six to 10 times. Those who bought sex said they had no other choice.

Prostitution is linked to venereal diseases. Last year, the National Health Insurance Corp. reported that the number of elderly people who visited hospitals with STDs increased from 10,713 in 2006 to 17,265 in 2010. Most of them had syphilis, herpes or giardiasis.

He said that their world is changing. Those with an open mind on sex are increasing in number, while innovative drugs to treat impotence are coming out. Older men are exposed to an environment which enables and also fosters an active sex life.

“In this situation, it is important to teach them safe sex rather than to show an attitude of indifference,” Lee said.

“We should induce them into venting their sex drive legally and in a healthy manner,” Prof. Chae Kyu-man of Sungshin Women’s University told a local daily.

Rim suggested government-arranged blind dates for elderly singles or widows as a way to help them have healthy relationships.

“In Florida, there is a block for elderly people. There they enjoy lives together, dining, dancing and singing. Then they go back home happy. The local administration, well-aware of their votes, never stops holding such fun events. Korea needs that kind of service,” he said.

The welfare ministry said it will publish a guidebook on senior sex and provide therapy for elderly couples. The authorities are also planning to throw matchmaking parties and other events for elder singles.

“Korea is rapidly becoming an aging society and is expected to become an aged society within six years. We have to think now about what we can do for the elderly people’s wellbeing,” Hwang Seung-hyun, a ministry official, said. “Their desires are natural so they should not be ignored nor treated as a trifling issue.”