It has been almost two years since Kim Min-jeong, a 29-year-old office worker, bought a recorded album. This was at almost exactly the same time as when she started using her iPhone from 2009.

“I used to buy CDs and download songs to iPod. Now I prefer listening to music directly via my smartphone and feel it unnecessary to carry extra devices,” she said.

The number of smartphone users surpassed the 20 million mark last year. The penetration rate is expected to exceed 70 percent of the population within the year.

With their smartphones or tablet PCs, people carry an MP3 player with them virtually all the time.

The fast adoption of smart devices has also driven online music sales in Korea more quickly than in any other country. 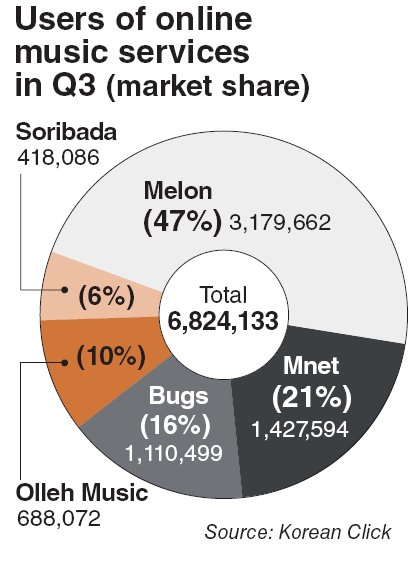 According to the International Federation of the Phonographic Industry, digital music revenues reached $4.6 billion globally in 2010, accounting for 29 percent of record companies’ trade revenue.

While offline music sales remain sluggish, online sales are to dominate up to 90 percent of total music sales here in 2014, industry watchers expect.

SK Telecom, the nation’s largest mobile carrier, currently dominates more than half the online music market. Of the 17 million users of its “Melon” service, 2 million are paid members.

Melon was able to succeed as it was launched when there was no legal online distribution channel for music files in Korea. The company logged 138.9 billion won in sales in 2010, up 37 percent from 2009.

In early 2009, just 1 percent of Melon users listened to music via their smartphones. But now the figure has surged to 62 percent, the company said.

Piracy, however, is still an issue for the online music industry, as it is estimated that one out of every two people is downloading music files illegally here. Korea, however, was also quick to toughen related rules.

In 2010, Korea, Taiwan and France became the first countries to implement laws aimed at curbing unauthorized copying, including by imposing warnings and deterrent sanctions on internet service providers.

Those working in the music industry, especially artists and composers, have also complained about the cheap online price of their creations.

Online music sites offer a bundle of several songs based on monthly payment, with a song selling at 60 won on average. They share half the profits with music providers such as music agencies, singers and composers.

“A hit song is downloaded 1 million times on average. But the profit is not enough to shoot a music video,” said Kim Young-min, CEO of SM Entertainment.

KT, the nation’s No. 2 mobile carrier and the distant fourth player in the online music service, launched “Genie” in December with an aim to become the Korean version of Apple’s iTunes.

Genie lets artists price their music and shares more profits up to 70 percent ― the same level as iTunes ― the company said.

“iTunes has succeeded not just because it was a perfect platform for digital music service but also because it shared more profits with copyright holders and encouraged the active participation of artists,” said Pyo Hyun-myung, president of the mobile business unit at KT.

Industry people showed some doubt that the price hike, up to 600 won for a latest song, could lead consumers to a black market for music downloads. They say “killer contents” could make users willing to pay more.

“We offer better conditions. So music agencies would want to release a new song first via Genie,” Pyo said.