By Korea Herald
Published : Dec 29, 2011 - 17:53       Updated : Dec 29, 2011 - 17:53
Chickenpox is an illness caused by a primary infection of the varicella zoster virus. After initial infection with the virus, it takes from 10 to 21 days for chickenpox to develop. At the onset of chickenpox, the patient shows symptoms such as fever, malaise, and loss of appetite for one or two days. This is followed by a skin rash that lasts for two to four days.

The rash first appears on the scalp and face, and then spreads to the entire body. Red, extremely itchy spots develop in earlier stages, which progress into papular and tear-shaped vesicles. These vesicles pustulate within one to two days, turn to resemble a belly button, and finally scab over to clear.

As new groups of vesicles continue to form while existing groups are progressing, all stages of rash, from red spots to papular vesicles, fluid-filled vesicles, pustules, and scabs, can be found on the body at once. The rash normally does not leave severe scars, but secondary viral infection can damage the skin. Healthy children typically have milder symptoms and recover easily without complications. However, teenagers, adults, and patients with impaired immune systems may develop severe symptoms and even die of the disease, and thus these groups require closer attention. 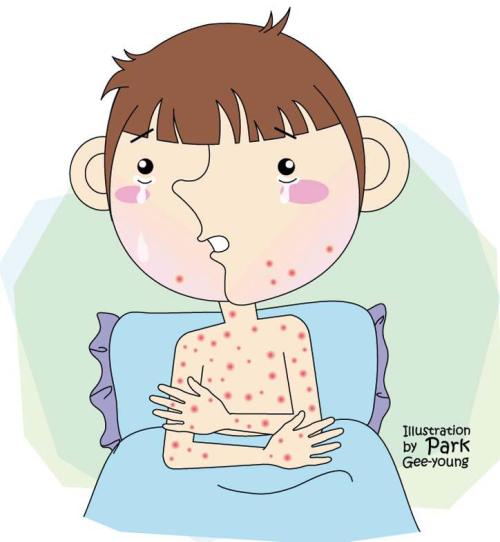 Physicians can usually diagnose chickenpox by looking at the rash and other symptoms shown by the patient. Healthy children normally do not require special treatment, but it is essential to observe whether complications are developing. About five percent of children suffer from secondary infections such as subcutaneous abscess, lymphadenitis and impetigo, which should be treated with antibiotics. More severe complications such as encephalitis, myocarditis, and excessive bleeding are not as common but are potentially fatal. Such severe complications are more likely to be found in patients who are being treated with immunosuppressants or are suffering from immunodeficiency. In such cases, aggressive treatment using anti-viral agents is necessary.

The occurrence of chickenpox increases in fall and winter, and thus these are the times to be most attentive. In order to prevent secondary viral infections, try to keep the patient clean at all times and cut the fingernails short to avoid scarring the skin. Teenagers and adults who have not been vaccinated or infected with the disease in the past must visit a physician immediately if symptoms appear. For those at greater risk of severe infection, including patients with impaired immune systems, pregnant women and newborns exposed to infected mothers, the administration of varicella zoster immunoglobulin within 96 hours of exposure can prevent or reduce the severity of the illness.

Currently, the chickenpox vaccination is designated as one of the basic vaccinations for children, and it is to be administered between 12 to 15 months after birth. Approximately 10 percent of those who receive the vaccine may still become infected with the disease, but the vaccination helps to make the symptoms milder. Patients with chickenpox remain contagious until all the vesicles have crusted over and dried out. Therefore, it is advised that patients with chickenpox, including children diagnosed as safe from all complications, refrain from coming into contact with others until the chickenpox sores have completely scabbed over and get sufficient rest.
By Yoo Keon-hee

The author is an associate professor of the Department of Pediatrics at Samsung Medical Center. ― Ed.