By Korea Herald
Published : Dec 8, 2011 - 19:17       Updated : Dec 8, 2011 - 19:17
The occurrences of pancreatic cancer and pancreatic cancer-related deaths are increasing notably. This disease, which used to be rare, has become one of the most common types of cancer. It began to draw wider attention when the legendary Italian tenor Luciano Pavarotti died of the disease four years ago, as well as Steve Jobs this year.

Since the pancreas is hidden behind the stomach, it is more difficult to access, and no medical breakthrough has been yet made to effectively detect pancreatic cancer in its earlier stages. It is deadly because it is often not diagnosed until it has advanced to an incurable stage even with surgery. 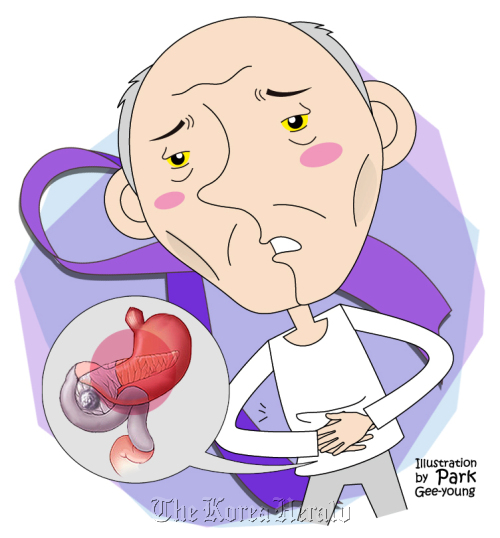 Function of the pancreas

The pancreas is situated along the width of the middle of the upper abdomen. It is more deeply buried in the abdomen than any other organ. It measures 15 centimeters in length and weighs 100 grams. It divides into the head, the body and the tail.

The pancreas is the digestive organ that secretes digestive enzymes, which help to break down the carbohydrates, fat, and proteins contained in food. It is also an endocrine gland that secrets hormones such as glucagon and insulin, which regulate blood sugar levels.

Women are more likely to be affected by pancreatic cancer than men, and those above 50 more than those under 40. There is no established cause yet, but smoking, chronic pancreatitis, diabetes, excessive drinking, an excessive intake of meat, and exposure to radiation are all reportedly responsible to some extent.

Due to the vague symptoms of early pancreatic cancer and the functional reserve capacity of the pancreas, it is exceedingly hard to detect it in the earlier stages. Furthermore, the pancreas is as thin as two centimeters and is covered only with a membrane. It is attached to the superior mesenteric artery, a blood vessel that supplies oxygen to the small intestine, and the hepatic portal vein, a blood vessel that transports the nutrition absorbed in the stomach to the liver. Pancreatic cancer easily infiltrates these vessels. Early metastasis to the fascicles of nerves and lymph nodes at the back of the pancreas is another notable feature. Cancer cells in the pancreas are also known to grow at a fast pace.

Though symptoms are nonspecific in the earlier stage, advanced pancreatic cancer causes weight loss and pain in the upper abdomen. Growing tumors in the head of the pancreas may put pressure on the biliary duct, which discharges bile, and lead to jaundice. However, tumors in the body and the tail are often detected after the disease is advanced to the terminal stage where lumps in the abdomen can be felt, tumors have spread to the liver, or dissemination within the abdominal cavity has occurred. In the terminal stage, the surgical removal of a tumor becomes highly unlikely and patients mostly have a poor prognosis. Therefore, it is advised to undergo regular testing for early diagnosis.

If patients aged 50 or older show symptoms such as drastic weight loss, pain in the upper abdomen due to an unidentified cause, indigestion not explained by digestive tract testing, steatorrhea, and the recent onset of diabetes despite no history of obesity in the family, they should be tested for pancreatic cancer. Also, if pancreatic enzyme levels from blood testing and urine testing are found to have changed substantially, this indicates the possibility of pancreatic cancer. Patients suffering from chronic pancreatitis and those with a history of pancreatic cancer in the family must be tested on a regular basis. For diagnosis, computed tomography of abdomen and a blood test for serum CA 19-9 (carbohydrate antigen 19-9) are performed, as well as MRI and endoscopic ultrasound, if needed.

Presently, the surgical removal of a tumor is the only fundamental treatment option for a complete cure of pancreatic cancer. Pancreatic resection can often involve the removal of a large part of the pancreas and requires an extended period of time. The phase of healing and recovery, which takes about two to three weeks, is also longer than other types of surgery. However, as new curative surgical methods are being developed, as well as improved post-surgery care for patients, an increasing number of cases are becoming eligible for resection through the combined resection and reanastomosis of major blood vessels near the pancreas.

About 70 to 80 percent of patients diagnosed with pancreatic cancer remain ineligible for surgical removal. These patients receive chemotherapy or a combination of chemotherapy and radiation treatment to raise the survival rate.

The author is professor of medicine at Sungkyunkwan University School of Medicine. ― Ed.