Growth of the country’s gross domestic product, a key gauge of economic performance, was up from an earlier estimate of 0.7 percent, according to the Bank of Korea, but extended its downward trend for the second straight quarter after 1.3 percent growth in the January-March period.

The economy grew 3.5 percent in July-September from the same period last year. The latest economic figures underlined that the Korean economy, the fourth-largest in Asia, is likely to see its growth falter with its domestic demand tepid and external risks such as the eurozone debt crisis showing no sign of abating. 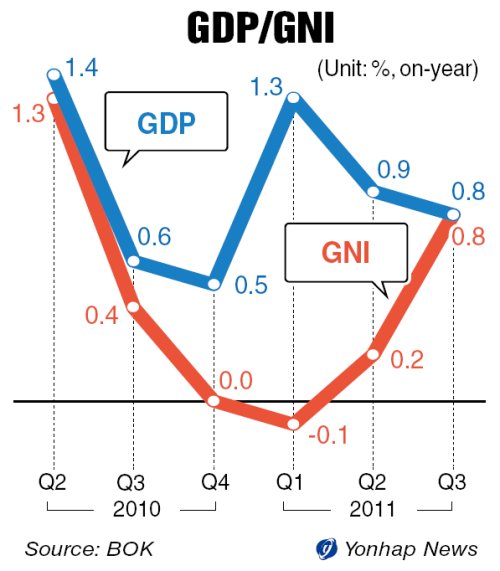 “Expectations that exports will slow down indicate that the direction of the South Korean economy will depend on future consumer spending and facility investment,” said Jung Young-taek, director of the BOK’s national accounts division.

Exports gained 1.6 percent in the third quarter from the second but private spending rose a paltry 0.4 percent, raising concerns about whether the economy could bolster its defensive position against greater global growth concerns.

Facility investment fell 0.8 percent on-quarter in the third quarter, down from 3.9 percent growth recorded in the second.

The indicators pointing to a stagnation of the economy are in line with the Korean government’s earlier warning that external uncertainties such as the eurozone debt problem pose downside risks.

Taking such negative factors into consideration, the BOK kept steady the key interest rate for the fifth month in November, and analysts expect the central bank to freeze the rate again on its policy-setting meeting Thursday.

On Tuesday, the BOK also released the country’s gross national income data that rose 0.8 percent in the third quarter, better than a 0.2 percent gain in the previous quarter.

The central bank will put out its 2012 growth outlook on Friday, with most private think tanks projecting the country’s economy to grow at less than 4 percent next year.