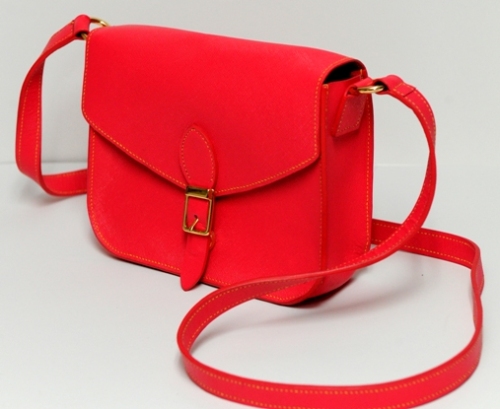 
While there are plenty of good things to say about leather crafting, the growing number of addicts of the hobby pick one above all others ― what you make is completely unique.

“Regardless of the amount of money you pay for an expensive designer bag, someone else is bound to own the same one. I find pride in making something that only I can possess,” Kim Yu-ri, a blogger who started learning leather crafting four months ago, said.

Although Korea is definitely a thriving market for designer brand bags, wallets and other leather accessories, leather crafting only really began to grow as a hobby about two years ago.

It is not such an expensive pasttime either, especially considering everything you make during lessons will be yours to keep.

Monthly fees for the lessons at workshops range from 300,000 won to 400,000 won, excluding the cost of leather, Kim told The Korea Herald at the Chad Keane Atelier in Myeong-dong, Seoul.
“In the beginning, the quality of the leather doesn’t matter that much. It’s just fun to be making something with your own hands.

“One begins to look for pricey leather with good quality after a while,” she said.
Chad Keane, which was one of the very first leather craft workshops to provide lessons to the public, also offers a one-day lesson for 50,000 won, which is a good way to find out if you are up for this seemingly luxury hobby.

While some people might think of it as “girly needlework,” there are actually more men than women at Chad Keane, according to the owner of the workshop who asked not to be named for personal reasons.

“Men can actually be pickier than women when it comes to leather accessories, because it’s not the brand, but the design and practical aspects that they find important,” he said.

“Designing and making a bag they really want and need seems to please them. These crafted items are priceless,” he added. “It’s not just about the quality of the leather that is used. It’s more about the time, effort and devotion you put into the process.”
It could take anywhere from two weeks to a full month to complete a leather bag, depending on the design and the skill of the crafter. First-timers usually start off by making small accessories like card or coin holders, continuing on to clutches and Boston bags.

Once leather crafters get the hang of cutting and the sewing, they can try out harder tasks, such as patching up, dyeing and painting on the leather.

“Leather craft is such a good hobby because it is continuously challenging,” the shop master said.

Chad Keane, a modest-sized workshop which opened in 2006, has 16 students, who drop by twice a week for a total of four hours.

One of the students comes to class every week from Jeju.

“These are very passionate people we’re talking about,” the shop master said.
Some of the bags made by the atelier owner, who also owns a small boutique on the ground floor of the same building, have also been purchased and carried by celebrities including Korean star Lee Byung-hun. Lee’s sister Eun-hee was a student at Chad Keane.

Two people have opened their own ateliers after taking classes in Chad Keane, and at least two more are preparing to start their own business soon.

“But I wouldn’t recommend taking up leather craft with a goal of making money in the near future,” the shop master said. “The people who last long are usually those who find crafting itself fun and charming.”

Kim, who posts stories related to her experience and photographs of the craft she made on jellyyr.blog.me, also hopes to open her own boutique and workshop, possibly within the next three years.

“As much as I like making things for myself, I also feel good about making gifts for friends and family,” she said.

“Hand made leather crafts are treasured gifts which are both durable and practical. I feel so good about watching someone I care for using a gift I made for him or her.”

For beginners, one of the hardest parts of leather crafting is picking out good leather, according to Kim.

A tip for leather shopping is to choose one with a “smooth surface, little gloss and strong resilience.”

Although Kim did major in arts in college and worked as a graphic designer for several years before taking up leather crafting, she emphasized that dexterity and artistic skills were the least important preconditions in becoming a good leather crafter.

“What you really need is patience. I tell my friends it takes just one percent of talent and 99 percent of patience to really enjoy this hobby,” she said.

Beginners can get a general idea about leather craft on the Internet by visiting www.sympa.co.kr, caf.naver.com/mysun24 and blog.naver.com/ilmaremi.