The National Assembly on Tuesday passed the long-pending Korea-U.S. free trade agreement, with the ruling Grand National Party pressing ahead with the ratification process despite vehement objection from opposition parties.

Upbraiding the majority GNP and the government for “unilateral action,” the main opposition Democratic Party pledged to stage an “all-out struggle” to invalidate the pact, part of which it claims should be renegotiated to protect local industries.

The passage is expected to escalate the persistent partisan standoff at the National Assembly at a time when ruling and opposition parties should cooperate to handle a series of key bills, including the 2012 state budget plan.

A total of 151 lawmakers voted in favor of the deal while seven voted against it with 12 abstaining. Out of the total 295 lawmakers, 170 participated in the full-house vote during the unicameral legislature’s plenary session. 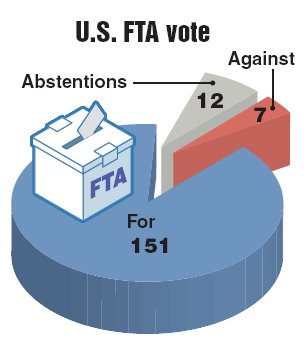 The Assembly also passed 14 related bills needed for the implementation of the pact.

The passage came more than four years after the two governments signed the landmark deal to tear down trade barriers between the allies. The U.S. Congress passed it last month when President Lee Myung-bak visited Washington.

The Seoul government said that it would make the “utmost efforts” to effectuate it on Jan. 1 as the two governments have agreed. It claims that the pact would help boost the export-driven economy and further strengthen the Korea-U.S. alliance.

When the pact with the U.S. takes effect next year, Korea will have free trade agreements with a total of 45 countries including Chile, Singapore, India and Peru.
As widely expected, a rowdy scene unfolded as Rep. Kim Sun-dong of the leftwing Democratic Labor Party set off a tear gas canister at the Assembly speaker’s seat in the main chamber to block the voting procedure.

It was the first time in history that a tear gas canister was detonated to hamper the legislation process.

The long-awaited vote came after Vice Speaker Chung Ui-hwa of the GNP bypassed the panel session to set up a full-house vote. The bill had been pending at the Assembly’s trade committee with opposition legislators blocking lower-level deliberation sessions.

Assembly Speaker Park Hee-tae, a former GNP chairman, delegated his authority to Chung to call and preside over the plenary session after mobilizing his security personnel to maintain order and forestall physical clashes among the political foes.

The ruling party took a surprise action to pass the bill after its eleventh-hour efforts to find common ground with the rival DP failed.

Earlier in the day, GNP floor leader Rep. Hwang Woo-yea met with his DP counterpart Rep. Kim Jin-pyo, but failed to reconcile differences. After their general meeting, GNP lawmakers occupied the main chamber in a surprise move for ratification.

The GNP holds 169 seats out of a total of 295. In order to pass the motion, a minimum of 148 was required to attend the plenary session.

“From this time onward, we declare the passage is invalid as the GNP unilaterally rammed it through parliament. We will stage a campaign to nullify it,” he told reporters.

“This government staged another ‘coup’ again. We, the DP, deeply apologize to the citizens for failing to block the coup.”

The major bone of contention was a set of controversial clauses on the Investor-State Disputes settlement mechanism. The DP demanded that they, at the very least, should be removed from the FTA agreement.

The ISD system allows U.S. investors to seek settlements on disputes with the Korean government in the courts of a third country. The DP argues that this would work mostly favor the U.S. as a super power.

Cheong Wa Dae said that it would draw up follow-up measures to support farmers and other mid- and small-business operators who are likely to be affected by the free trade deal.

“We thank citizens for their long support for the FTA with the U.S. We are also grateful to the lawmakers for making efforts for a long time to pass the motion,” said Choe Geum-nak, senior presidential secretary for public relations.

“The government will actively consider issues for farmers and local businesses ― raised through the parliamentary deliberation process ― and craft follow-up measures to help strengthen their competitiveness.”

“After the pact goes into effect, one of the clauses in it states that if any side takes issue with it, a renegotiation is possible within 90 days of the effectuation. The government will accept it should the Assembly make a request based on the clause,” he said.

“I have tried my best to reach a bipartisan agreement over the pact, but failed to do so. For that, I am sorry,” he said in a press release.

The GNP said that the surprise move was an “inevitable choice.”

“It was an inevitable choice to overcome the limits at the Assembly where we had difficulty taking even one step ahead due to the objections for the sake of political gains from the opposition parties including the DP,” said GNP spokesperson Rep. Kim Gi-hyeon.