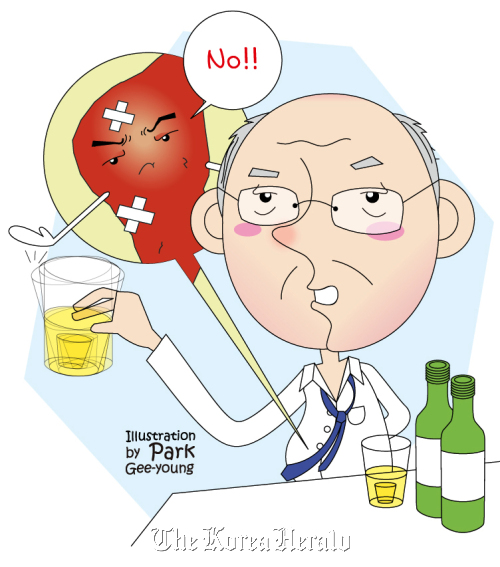 Fatty liver is a disease where fat, and especially the neutral fat (triglyceride), is accumulated in the liver cells and takes up more than 5 percent of the liver weight.

Liver is a chemical factory in human body and plays many different roles including processing fat. And if fat from the food is not properly processed, it can cause fatty liver.

Alcohol is one of the most well-known causes of fatty liver. Alcohol lowers many metabolic functions of the liver, especially by reducing the ability to decompose fatty acid oxidation, which results in accumulation of fat in the liver.
Even people who rarely drink alcohol are diagnosed with fatty liver and have a follow-up or even medication, because there are many causes of fatty liver other than alcohol.

The possibility of having alcoholic fatty liver is determined by the amount and period of alcohol consumption regardless of the type of the drink. For instance, a bottle of soju (about 70mg of alcohol) has a similar amount of alcohol as three bottles of 500cc beer (about 25 mg of alcohol).

Obese people are often found with fatty liver and it can also be caused by endocrine diseases such as diabetes, overuse of steroid hormone and serious malnutrition. It is hard to discover fatty liver based on symptoms alone because it does not have special symptoms.

There can be fatigue, lack of appetite, lethargy, which are general symptoms of liver disease, or discomfort under the right rib and dull pain. During a liver function test, serum, GOT, and GPT, as well as gamma GT in case of drinkers, increase by 2 to 3 times of the normal values.

Although it is difficult to distinguish it from chronic hepatitis, accurate diagnosis is possible if accompanied by ultrasonography, CT, or liver biopsy.

Treatment of fatty liver begins with discovering the positive cause and removing it. At the stage of alcoholic fatty liver, it can recover to the normal state after quitting alcohol.

Therefore, when alcohol is the cause, it is most important to stop drinking and then supplement the nutrients that are lacking due to alcohol such as protein and vitamins.

Also, if you exercise 30 to 40 minutes per day for more than twice per week, it will be cured within three to six months. Although temporary alcoholic fatty liver is usually not a problem, if you keep drinking at this stage, it can be developed into alcoholic hepatitis and cirrhosis. This can be very dangerous and, often, you cannot stop the progress of the illness even if you stop drinking. It can have worse prognosis than that of cirrhosis caused by hepatitis B.

If you are experiencing fatty liver due to obesity, you should avoid foods that are high in fat and ingest foods that contain vitamin, mineral fruits and fresh vegetables. Also you need exercise to help lose weight and prove basic physical fitness. People with diabetes must follow certain dietary rules and exercise. According to a doctor’s prescription, medication should be combined.
By Lee Joon-hyoek, M.D.

The author is a doctor at Division of Gastroenterology of Samsung Medical Center. ― Ed.