Samsung ahead of Apple in Q3 smartphone sales

According to the data, Samsung Electronics sold about 27 million smartphones during the July-to-Sept. period, while Apple’s figure came in at about 17 million. 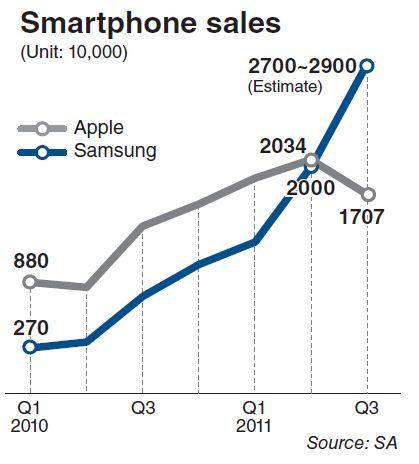 While those in the industry had forecast that Samsung Electronics would outperform Apple in the period, the Korean electronics maker was expected to gain, at most, a 3 million handset lead.

While some point to Apple’s postponement of the launch of its new handset as the cause of the changes in the two companies’ figures, Samsung Electronics has been closing the sales gap between it and Apple for some time.

For the second quarter of last year, Samsung Electronics took 5 percent of the global smartphone market while Apple took 13.5 percent.

While the new iPhone 4S has proved highly popular, those in the industry expect the Korean company’s lead to be maintained during the final quarter of the year.

In the four days following the iPhone 4S launch on Oct. 14, more than 4 million units were sold, outpacing the previous model’s sales figure for the comparable period by more than twofold.

However, with Samsung Electronics having a larger lineup and Galaxy Y, a more affordable smartphone model designed for emerging markets, ready for launch, some industry watchers are projecting that the company’s smartphone sales during the final three months of the year could rise as high as 40 million units.