Is Korea becoming a “suicide republic?”

Last year, a total of 15,413 Koreans committed suicide, equivalent to about 42.2 people taking their own lives every day, according to the Ministry of Health and Welfare.

According to Statistics Korea’s report on the suicide rate in 2009, 28.4 persons committed suicide for every 100,000 people. The figure is higher than that of any other OECD member country and more than double the OECD average of 11.3. 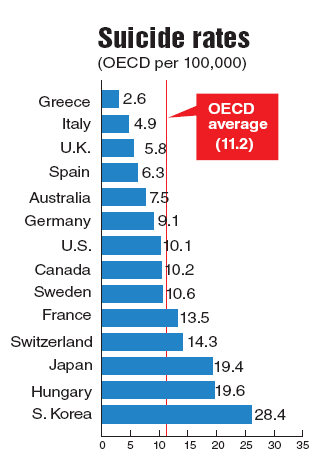 What makes experts and authorities more anxious is the growing portion of the younger demographic seeking to end their lives. It is No. 1 cause of death among teenagers, 20-somethings and 30-somethings. It takes second place among those in their 40s and 50s.

That this is happening to a portion of the population that is typically financially active alarms many.

“The years-long economic slowdown has driven many youths into an economically vulnerable state since to land a job has become more difficult than ever,” said Prof. Lee Gwang-ja of Ewha Womans University. “The overall business conditions are also weighing hard on those in their 40s and 50s, who are mostly bread-earners.

“Mostly, they experience great confusion in life and don’t know what they want. Lack of a goal in life often leads to mental instability.”

Rep. Lee Hae-bong of the ruling Grand National Party said that suicides caused up to 4.9 trillion won in socio-economic losses in 2009.

One woman said that she suffered from depression long after her father-in-law committed suicide four years ago.

“I kept asking what had driven him to such a drastic decision. What could I have done to prevent it? The agony was more than I could bear,” she said.

Depression is considered the leading cause of suicide.

Dr. Jeon Hong-jin of Samsung Medical Center said at a symposium last month that people with depression are more likely to attempt suicide. The NECA report suggests that one out of every 20 people here have suffered depression once in their lifetime but only 15 percent seek help.

“If those struggling with depression come under severe stress, they are highly likely to surrender and commit suicide,” he said at the seminar.

One of the most effective ways to prevent a further increase in the suicide rate is to run tight consulting/monitoring programs for those with suicide attempt records.

Min said it is a rather easy process.

“Those who have attempted suicide are delivered to the emergency rooms. They are visibly distinguishable because they have several patterns of physical symptoms. Doctors arrange for the psychological staff to take care of their mental status from on,” he said.

Min suggested that even after they are discharged from the hospital, ongoing consultation and checkups on their day-to-day lives can make a dramatic difference.

“My hospital, (Wonju Severance Hospital) also sees about 400 such people a year. We have run such pilot programs from last year and have seen some improvements since the patients expressed satisfaction and strong willingness to start their lives all over,” he said.

Such methods have proven effective in Hungary, Finland, Norway and Japan, where suicide rates were once far higher than Korea’s.

Despite slews of report highlighting the necessity of state or community intervention into the suicide problem, the government has shown a poor understanding and little enthusiasm, according to an unnamed health Ministry official.

While the Ministry of Health and Welfare heavily depends on civic groups, volunteers and others for anti-suicide campaigns, the Ministry of Strategy and Finance has given it the cold shoulder.

This year, the Welfare Ministry requested 20 billion won for anti-suicide programs including recruitment of professional counselors to work at general hospitals and counseling centers; the establishment of infrastructure supporting low-income suicidal persons and others, but the finance ministry cut the amount to 1.4 billion.

“You can hardly do anything with that,” a ministry official said. He noted that the Japanese government’s annual budget for similar projects mounted up to 300 billion won in 2008.

“It is time the government understood the gravity of suicide and its effect on the whole society,” Min said.