As the upcoming Seoul mayoral race comes down to a four-party contest ― two party-affiliated and two independent figures ― both the ruling and the opposition camp are set to unify their candidates before the actual showdown.

Park is now to compete against independent liberal candidate Park Won-soon for the sole opposition candidate in another race scheduled for next Monday.

The two Parks pledged to compete in good faith and accept the given results.

Both of them also answered on a radio show on Monday that they are considering taking up the other’s election campaign committee chairmanship in the event that they lose the unification race.

The relatively peaceful mood in the opposition camp over the single candidacy issue was largely due to Park Won-soon’s gesture to unconditionally accept the DP’s rules, though they may be unfavorable for him.

The DP candidate, however, made it clear that the decision is to be made through an official race.

“Park Won-soon has not yet offered concrete policies or his assessment of the Lee Myung-bak administration,” she said. She has vowed to define the Oct 26 by-election as an evaluation of the Lee government. 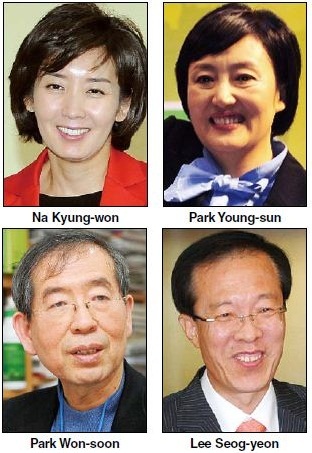 “I would be violating the principle of party politics, should I unite with him without due processes.”

The independent candidate, however, stressed that his candidacy represents the citizens’ demands for change in party politics.

“Though independent candidates such as Park received public attention, they may only face limits once they come within the political circles,” said Rep. Kim Chung-kwon, the party’s secretary-general on Monday, hinting that Lee should give way to GNP’s Rep. Na Kyung-won.

Na, though she has not yet officially announced her candidacy, has become the party’s standard bearer as Rep. Kim Choong-whan, the other candidate seeking the nomination, renounced his challenge on Monday.

Amid the tug-of-war between parties and non-party camps, the GNP and the DP also took shots at each other with their respective election mottos.

“For the Seoul citizens, the upcoming mayoral by-election is about voicing their judgment over the corruption and 25 trillion won debt left by the two former GNP mayors,” said the DP candidate Park in the DP Supreme Council meeting.

Na, however, claimed during a radio interview that the by-election votes should be based on the candidates’ objective policies, not political judgments or revenge.