“Yu used to criticize the policy of gradual unification, but has suddenly changed his stance, now that he has been appointed to the minister post,” said Rep. Park Joo-sun of the main opposition Democratic Party. 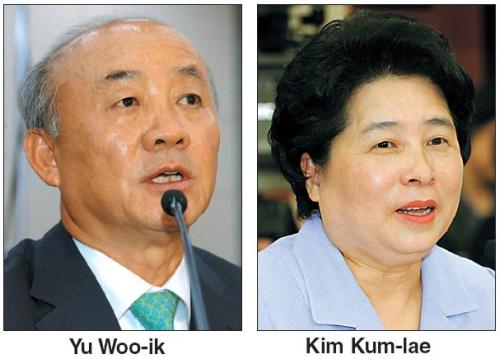 Rep. Won Hye-young claimed that the nominee failed to prove his capabilities in his past positions.

“The Cheonan Corvette sinking took place during Yu’s years as ambassador to China, but he contributed little to the diplomatic aftermath,” said Won.

Ruling party members also agreed that the inter-Korean relationship has been strained under the current administration and inquired to find out whether Yu is capable of helping to resolve the conflicts.

“The point is whether Yu will stick to the present policy lines.”

“During the 19 months when Yu was working as ambassador to China, his wife spent more than six months in China, but nevertheless received her full salary, amounting to 182 million won ($164,260),” said Rep. Choi Jae-sung of the DP.

“Kim’s husband registered his real estate in a false name in order to qualify for the company apartment application,” said Rep. Kim Yoo-jung, but the nominee denied the charges.

The former women’s rights activist was also suspected of evading acquisition and registration taxes upon buying her apartments in Bundang and in Yeouido.

GNP members, however, focused on questioning her over her women’s welfare policies, such as means to increase the female proportion among high-ranking government officials.