Following Japan’s nuclear crisis at Fukushima, next year’s nuclear security summit in Seoul will focus on how to improve safety in atomic energy, organizers said Monday. 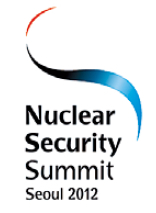 The Seoul summit is expected to focus on interrelated subjects of nuclear security and safety, organizers of the summit said, as the meeting of some 50 state leaders and chiefs of international agencies is now just six months away.

“There is an unsaid agreement that nuclear security should now be dealt together with nuclear safety to tackle both issues at the same time,” said Kim Bong-hyun, who will serve as South Korea’s chief expert for the March summit.
Meeting with supporters of the upcoming meeting Monday, Seoul’s Foreign Minister Kim Sung-hwan said he was “looking forward to some active cooperation on pending issues,” noting the summit was the largest meeting of national leaders in the field of nuclear security.

“We expect the meeting to play a great role in stabilizing the Korean Peninsula, upgrading the general public’s understanding of nuclear security and promoting South Korea,” he said.

Nuclear security has become an important issue in fighting nuclear terrorism since the Sept. 11 attacks against Washington.

The first round of the Nuclear Security Summit was held in Washington last year, with state leaders and chiefs of international agencies gathered to discuss how to better safeguard weapons-grade plutonium and uranium to prevent nuclear terrorism. In the run-up to next year’s summit, South Korea and the U.S. agreed that “nuclear safety” should top the agenda of the multinational conference.

Hosting the second summit is a symbolic occasion for South Korea which neighbors North Korea and is in direct danger from its nuclear ambitions.

As the host of the international conference usually plays an important role in setting the agenda, the North Korean nuclear issue is expected by analysts to be an important topic at the 2012 summit.

The multinational talks aimed at ending North Korea’s nuclear ambitions have been stalled since the end of 2008, when Pyongyang left the negotiation table claiming other dialogue partners had failed to keep their side of the deal. But, in need of international aid, North Korea has been joining diplomatic efforts to reopen the dialogue.

Among leaders attending the Seoul summit will be heads of five nations in the six-party talks, including U.S. President Obama and Chinese President Hu Jintao. The talks involve the two Koreas, the U.S., China, Japan and Russia.