According to a report by the Organization for Economic Cooperation and Development, while Korea ranks third among member countries in terms of the proportion of women with university education, the country has the seventh-lowest employment rate for women.

The average OECD female employment rate is 59.6 percent, but the figure for Korea is 52.2 percent, placing the country seventh from last. The OECD average for women with degrees is 40 percent while Korea’s figure clocked in at 60 percent. 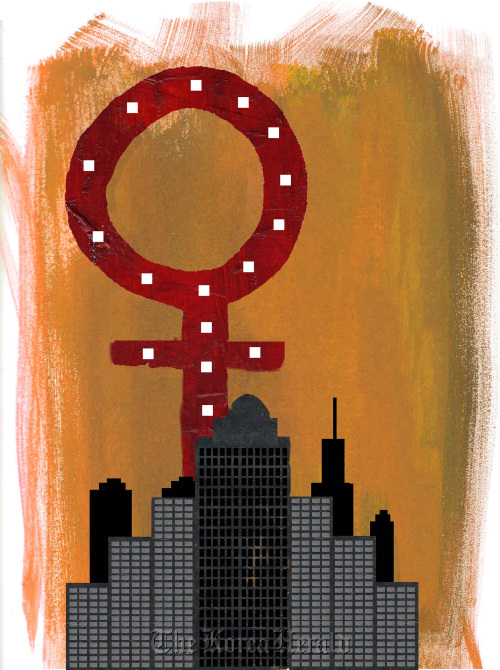 In addition to having comparatively low employment rate for women, Korea also has the largest disparity between the average salaries of men and women.

According to the Korean Women’s Development Institute there was a 38.8 percent disparity between the average income of men and women. The figure, which is more than twice that of the OECD average of 16 percent, is the largest among members of the organization.

Samsung Electronics recently made headlines, shortly after its chairman Lee Kun-hee said that women should be able to become chief executives, for the large disparity between the average salaries of its male and female workers. According to the company’s regulatory filing for the first half of the year, its 69,000 male employees on average drew 38.1 million won, while the 31,000 female employees earned an average 22.3 million won.

However, the electronics giant is far from unique in having a much larger average salary for men. In addition to those at Samsung Electronics, male employees of the country’s 10 largest companies by market capitalization draw a much larger salary than their female colleagues.

Of the 10, the difference between the average salaries of male and female employees was the largest at LG Chem’s petrochemicals division, with the men taking home on average 1.94 times more than their female colleagues.

While nine of the 10 companies’ statements showed that male employees had on average worked at the companies for longer -- which is one of the reasons to which companies attribute the salary disparity -- this was not true in all cases.

Of the 130 staff at Shinhan Financial Group -- the holding company of the Shinhan banking conglomerate -- men made on average 1.8 times more than women, but their average duration of employment fell was one year shorter.

“When you compare male and female employees who hold equal positions there is no difference between their salaries.”

While explaining the disparity, the answer points to another sign of discrimination against women at local companies; namely the lack of female executives.

According to Korean Women’s Development Institute, only 4.7 percent of the executives at companies employing more than 1,000 people were women.

In comparison, the figure for Norway stood at 39.5 percent while that for the U.S. came in at 15.7 percent.

“A female colleague in our company was recently passed over for a promotion in favor of a man, despite being considered highly capable and having more experience than the male colleague,” a female employee of a major manufacturing firm said on condition of anonymity. She added that this male-centric culture remains prevalent at many Korean companies, particularly those in the manufacturing sector, despite the advances made over the years.

“Obviously it’s not an official policy to not promote women but more often than not a woman will be looked over if there is any male candidate.”

While the old fashioned resource management system may not be officially condoned at larger companies, which are subjected to close public scrutiny, such goings-on are less well hidden at some smaller companies.

“I don’t know if women simply don’t like our company but the higher-ups seem to dislike hiring women for administrative positions as they take it as a given that women will leave once they get married or become pregnant,” a male employee of a mid-sized manufacturing company’s human resources team said.

The comparatively large proportion of working women accounted for by those holding irregular positions also contribute to the disparity in average annual salaries.

According to Statistics Korea data, about 42 percent of the 7.24 million employed women held such positions, while only 28 percent of the 9.83 million economically active men were working on irregular contracts.