Have you been vaccinated?

Vaccines are considered one of the most effective ways to prevent viral infection; sometimes, in fact, the only way. 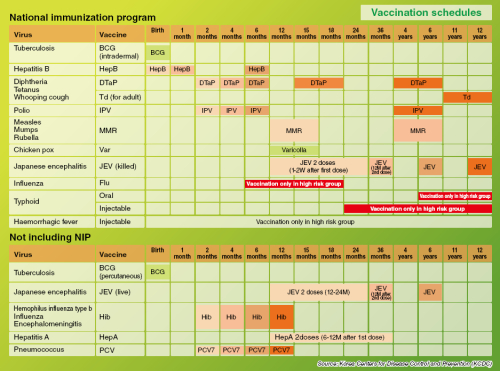 Vaccines also have eradicated some of the most fearful diseases from the country: the World Health Organization pronounced Korea a polio-free state after mass provision of anti-polio vaccines, though the disease killed or disabled many people just decades ago.

Vaccine technology has now reached a level where cervical cancer, which was one of the most frequently diagnosed gynecological cancers until very recently, could be prevented with three shots. The tools have evolved, too, and the pain reduced, barely leaving any scars.

Of course there are opponents. The U.S. Centers for Disease Control and Prevention also acknowledges some risks. It notes that any vaccine can cause side effects and that for the most part these are minor ― for example, a sore arm or low-grade fever ― and pass within a few days.

The center also advises parents not immunizing carries the risk of contracting serious diseases, and not only for the child but also those who come into contact with him or her.

“The government has designated vaccines necessary for the health of infants and throughout their lives. It has contributed to the longevity of Koreans and their health,” said Lee Youn-kyung, researcher of KCDC.

“We strongly advise people to be immunized from preventable diseases. There are clear benefits.”

Here is the vaccination timetable recommended by the KCDC.