Korea’s leading businesses are making their forays into Latin America, which has emerged as a favored destination among global investors for its growing economy, ample natural resources and robust domestic demand.

The investment race is increasingly hot across continents. China surpassed the U.S. to become Brazil’s largest trading partner last year. It poured about $30 billion into the world’s eighth-largest economy in 2010 alone, compared with Korea’s $1.05 billion.

“Latin America has been receiving attention as a result of economic growth and for its importance as a treasure house of natural resources,” said Kwon Ki-su, chief researcher for the Korea Institute for International Economic Policy’s Latin America team.

“Multinational corporations are diversifying their investments from assembly production into research and investment, aiming to gain a firm foothold in the market.” 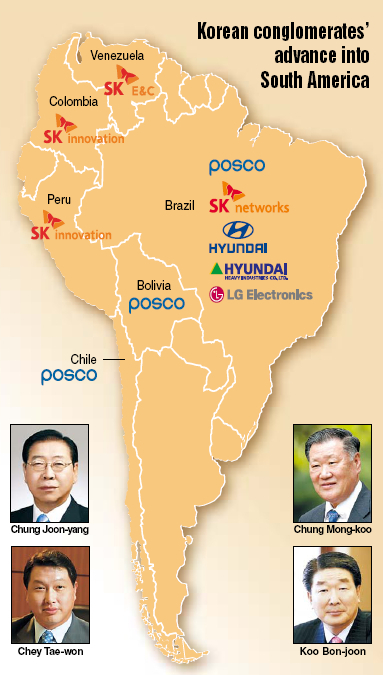 At the forefront of the trend is SK Group, Korea’s third-biggest conglomerate. Since it made inroads about 15 years ago, Latin America became a stronghold for the group’s overseas business.

SK Innovation, the group’s refinery unit, holds stakes in four oil and gas mining fields in Peru and in another three blocks in Colombia, hoping to double its crude reserves to 1 billion barrels by 2015.

In Brazil, SK Networks, which focuses on resources development, plans to invest $700 million in MMX Mineracao & Metalicos SA, an iron ore miner, while SK Engineering & Construction is taking part in a Venezuelan project to develop the Orinoco heavy crude belt.

“It is only natural for us to spur business around the region, because it is a strategically important fort for the company,” an SK spokesperson said.

Last month, the world’s No. 3 steel mill outstripped bidders from the U.S., Japan, France and Brazil in a deal to launch a joint venture with Bolivia’s state-run miner Comibol to make lithium-ion battery parts there.

Prices of the soft, silver-white metal have soared in recent years on the back of surging demand for smartphones, laptops and electric cars. The steelmaker is also working with Peru-based Li3Energy to drill lithium carbonate in Chile’s Maricunga salt flats.

In Brazil, POSCO joined forces with Japan’s Nippon Steel Corp. and others to buy a 15 percent share in Companhia Brasileira de Metalurgia e Mineracao, the world’s No. 1 producer of niobium, a rare metal used in high-grade steel products.

Hyundai Motor Co.’s first plant in Brazil is expected to enter production late next year, targeting a 10 percent slice in the rapidly expanding market by 2013 compared with the current 2.4 percent.

Hyundai Heavy Industries Co., the world’s largest shipyard, is also injecting $150 million to build a factory in Rio de Janeiro to manufacture construction equipment such as excavators and loaders.

SAMEX is Samsung Electronics’ unit in Tijuana, Mexico. Despite the city’s notoriety for drug cartels and human trafficking, the plant has expanded to the largest of the company’s 14 production bases worldwide, accounting for about 20 percent of total TV sales.

LG Electronics is working on its third factory in Brazil. With the $100 million facility, the electronics giant can make nearly all items in its portfolio locally.

LG and Samsung are among the top three players in Brazil’s consumer electronics market, according to Euromonitor International.

“Both companies succeeded in increasing share in competition with traditional manufacturers such as Sony, Philips and Semp-Toshiba in a short period, driven by strong investments in wider portfolios, new product developments, modern design and merchandising actions at the point of sale coupled with a mid-price strategy,” the research firm said in a report.

Latin America’s sound economic growth was behind the investment spree.

While Europe and the U.S. struggle with their sluggish recovery, surging commodity demand and stimulus measures helped countries in the region quickly escape from a global slump.

“High commodity prices and easy external financial conditions are the main tailwinds propelling growth, in some instances at a pace faster than some economies are prepared for,” the Fund said in a report, warning of overheating.

Foreign direct investment inflows totaled $113 billion last year, up 40 percent from a year earlier, according to the United Nations’ Economic Commission for Latin America and the Caribbean.

But a difference in consumer trends between countries requires companies to take a cautious approach to each market, said Yoon Jae-chun, head of the Korea Trade-Investment Promotion Agency’s Europe and Americas unit.

“Korean enterprises should be aggressive but precautious given that inflation, protectionism and other non-tariff barriers may be a variable in their business,” he said in a report.

The companies’ growing appetite for Latin American markets and resources coincides with the government’s efforts to firm up ties with the countries in the region.

Korea has been striving to shake off dependence on fuel imports amid toughening global competition for energy and rare metals.

Since 2008, President Lee Myung-bak has met with his counterparts in Mexico, Peru, Bolivia, Ecuador, Panama and more to help spur ongoing negotiations and ensure security in the field.

The Lee administration is looking to add Mexico, Colombia and the Mercosur, which covers Argentina, Brazil and Bolivia, to the list of its free trade partners.

According to the Trade Ministry, trade volume between Korea and Chile tripled since the 2004 implementation. The Korea-Peru deal went into effect on Aug. 1.

“To build sustainable economic ties with the countries in the region, Korea should lower trade barriers through FTAs and expand investment especially in the ‘green growth’ area, such as in renewable energy and environment,” said Kwak Soo-jong, a senior researcher at Samsung Economic Research Institute.