World copes with flood of retirees


To mark the 58th anniversary of its establishment on Aug. 15, The Korea Herald is publishing a series of articles on the looming retirement of Korean baby boomers and its socioeconomic impact on the nation. The following is the sixth of the eight-part series. ― Ed.

It is a worldwide problem ― the population aging faster than public pension systems can handle. Making things worse, the first batch of the baby-boomers have started to retire in many countries including South Korea, U.S., Japan and European nations.

The size of the working-age population in the OECD countries, however, is expected to peak around 2015 and fall by over 10 percent in 2050. As the number of beneficiaries will soon outstrip that of providers, many governments are raising the state pension age and reducing future pension benefits. 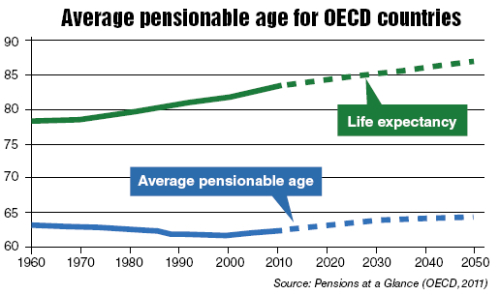 The average pensionable age in OECD countries will reach 65 for both sexes by 2050, according to OECD’s report “Pensions at a Glance 2011,” which represents an increase of about 1 1/2 years for men and 2 1/2 years for women.

But life expectancy is growing even faster than the increase in pension age ― by about two years for men and 1 1/2 years for women. The gap will need to be filled with private pensions and other savings, the report suggested.

Several developed countries already have started to reform of their pension plans with an emphasis on private pension schemes ― including corporate and personal pensions ― adjust retirement and pensionable ages and encourage soon-to-be retirees to save more and work longer. 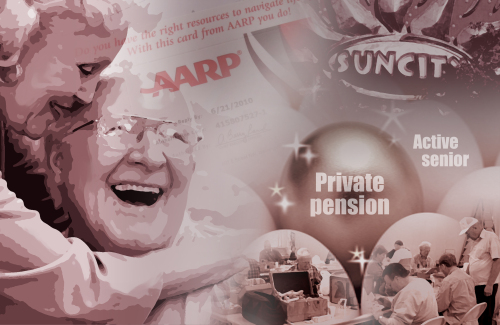 The U.K., which has been coping with a weak public pension system that once marked the lowest replacement rate of 33.5 percent among OECD member countries in 2009, legislated a new scheme that will begin operation in 2012.

Under the plan, all British firms will be required to automatically enroll their employees in a private pension. Employers will pay a minimum of 1 percent of every worker’s salary into a pension, up to 3 percent by 2017. Workers will pay 1 percent to 4 percent of their salary into the pension, phased in over five years.

The new plan will mean that hundreds of thousands of small companies that currently do not provide pension plans for its staff will begin making payments. Employers who fail to do so will face sanctions.

Australia has a similar system called “Superannuation Guarantee.” Employers are obliged to pay 9 percent of an employee’s salary into a superannuation fund. In addition, employees can voluntarily pay a certain amount of their salary, normally from 10 percent up to 20 percent, into the pension.

Switzerland and the Netherlands ― European countries considered to have established an almost-ideal pension scheme ― rely more on private funds than public funds. For providing near-universal coverage, the private pensions are described as “quasi-mandatory.”

The pension system in Switzerland is composed of three pillars ― a relatively small pay-as-you-go system; a mandatory, employer-based, fully funded occupational pension scheme; and a voluntary supplementary pension. The combination allows a high replacement ratio of at least 70 percent of its average former income, according to Annuities in Switzerland. More than 85 percent of Swiss enrolled in private pensions, even for a means of investment because they come with tax incentives.

In the case of the Netherlands, the replacement rate through the combination of the flat-tier public scheme and earnings-related private pension is close to a 100 percent of their pre-retirement income. Although it is not mandatory for employers to enroll the staff into pension schemes, 91 percent of employees are covered through collective bargaining at the industry level. The Netherlands marked the largest proportion of private pension assets to GDP (129.8 percent) among OECD member countries in 2009.

Many other countries such as Germany, France, Hungary, Poland, Portugal and New Zealand introduced new private pension plans as well, pepped up with tax credits or other benefits.

Germany, for example, introduced new subsidies for personal pensions after the Riester reform took place in 2001 to strengthen corporate pension. The Riester subsidy provides tax financed allowances and a tax rebate if a saver meets certain conditions in paying personal pensions or an occupational pension scheme. The saver can get an extra child allowance for each child as well.

Japan, the first country to become a super-aged society with over 20.6 percent of its population aged over 65, began preparing early and has established a relatively stable pension system. It is also putting stress on private funds by offering tax reduction of 276,000 yen to workers and 816,000 yen to the self-employed enrolled in private defined-benefit pension scheme.

The U.S.’ Individual Retirement Accounts come with different tax credit levels. The Traditional IRA, for instance, provides a maximum tax reduction of $5,000 for individuals under 50 and $6,000 for 50 and older.

As well as increasing the pensionable age, countries are encouraging the soon-to-be retirees to work longer and retire later.

Starting from April this year, U.K. started to phase out its Default Retirement Age procedure which had employers force out its employees when they reached 65 years of age. Now it will be illegal for firms to force out 65-year-old workers when they are still capable of working, while those who want to retire are allowed to do so.

The country also legislated the Employment Equality Age Regulations in 2006, which is now superseded by the Equality Act 2010, to prohibit employers from unreasonably discriminating against its staff based on age.

The employment rates of men and women aged between 50 and 64 have steadily increased since the 1990s in the U.K. In 2004, it marked 72 percent and 68 percent for men and women, respectively, which is comparable to 64 percent and 60 percent in 1994, according to U.K.’s Office for National Statistics.

A similar change is found in Germany as well, where the employment rate of individuals aged between 55 and 64 increased from 1998 to 2009 and marked 57.7 percent in 2010, the second highest in Europe after Sweden, according to Eurostat.

U.S. amended its 1967 Age Discrimination in Employment Act in 1986 and 1991 to secure that no age-based discrimination takes place at work. The act prohibits mandatory retirement in most sectors.

The country also has a very well-managed association for retirees called American Association of Retired Persons, which encourages retirees to find new work. Established in 1958, AARP has about 4,000 members whose ages range from 50 to 105. The association helps its members enjoy the final third of their lives by starting new academic careers; doing volunteer work for society like giving free driving lessons, taking care of the elderly, tutoring students and providing shelter for the homeless; as well as finding new jobs. AARP has become one of the biggest and most influential associations in the U.S.

Japan’s International Longevity Center, established by the country’s Ministry of Health and Welfare in 1990, gives opportunities for the retirees to participate in society again, mostly through volunteer work. Besides 2 million of its senior population older than 65 years of age, who are suffering from serious illness like Alzheimer’s disease, the rest ― 22.67 million ― are recommended to participate in the volunteer works. There are 126,504 senior volunteer clubs in which over 8 million members participate.

Denmark has the DaneAge Association, which was founded in 1986 and currently has more than half a million members. The association provides information on health, finances, travel, leisure and self-improvement as well as hold more than 100 workshops on volunteer work every year.