The past year was a remarkable one for The Korea Herald, particularly because the country’s biggest English-language newspaper has had undertaken measures to catch up with the mobile-oriented trends and implement innovation to stay ahead in the race.

In April this year, The Korea Herald launched its news app for the iPhone, which integrates English news and education. The news app, available at Apple’s app store, is designed to differ from previously introduced other news apps.

The app, based on the editorial, education and design know-how of The Korea Herald, is not just about news, but comes with useful English educational content. It is the first news app in Korea that fully incorporates educational content, suiting the needs of users who want to combine the news reading experience and English learning. 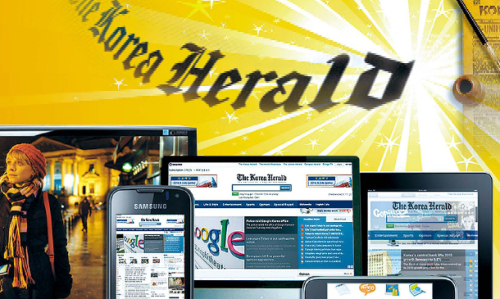 After a successful launch of iPhone app, The Korea Herald is now getting ready to unveil eve more powerful iPad app within a month, a move aimed at the fast-growing tablet PC market led by Apple’s iPad and Samsung Electronics’ Galaxy Tab.

Some of the iPad features will be the same as iPhone’s, but there will be a defining difference when it comes to multimedia content. The Korea Herald plans to incorporate more multimedia content into the iPad app in a bid to help its readers enjoy not only English news but also other English education content.

The Korea Herald also introduced the country’s first English mobile news alert service named “Herald Topic” in September last year. The service sends three text messages a day, in the form of an English headline and a Korean translation of a key word, a format aimed at students and business people who want to learn English through real-time headline updates.

The strategy of expanding platforms is anchored on the constant updates and upgrades of the main homepage. The Korea Herald has been putting more resources and manpower to upgrade its homepage, whose live updates are delivered to major online portals at home and top search engines abroad such as Google.

Given that disruptive technologies are reshaping the media industry across the world, the future holds both chances and risks. What’s certain is that, as pledged in the inaugural edition 58 years ago, The Korea Herald will continue to pursue its core values of a free, democratic and one day unified Korea while playing the role of a bridge between the Korea and the world in the new digital and mobile era.