North Korea accused the South of making up a story to worsen inter-Korean tensions.

Seoul’s Joint Chiefs of Staff said that the North on Wednesday fired five artillery shells on two occasions ― at 1 p.m. and 7:46 p.m. The firing was the first since the North shelled Yeonpyeong Island last November, killing two marines and two civilians. 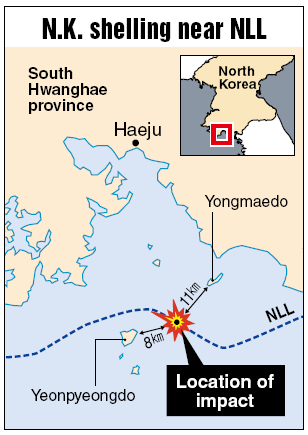 Two of the five shells landed near the Northern Limit Line, a de facto inter-Korean sea border. In response, the South Korean military fired three shots each at around 2 p.m. and 8 p.m. toward the NLL with its K-9 self-propelled howitzers.

“Taken aback by the blasting sound, South Korean military warmongers behaved indecently by fabricating a story in which they said we made artillery provocations,” a colonel-level North Korean officer told the Korean Central News Agency.

“As the construction has begun in earnest with an aim to enhance the life of the people in South Hwanghae Province close to the five northwestern border islands, the normal explosion work was carried out.”

He also added that the “fabrication” was made deliberately as the South Korean military seeks to put the two countries on a path of confrontation and block dialogue, the mood for which has been building on the peninsula.

Early in the day, the North has faxed a message to the Defense Ministry here to deliver the same message carried by the KCNA.

“We judged that we don’t need to respond to such hackneyed claims. We don’t feel it is worthwhile to make any mention about such unilateral arguments from the North, which are far from the truth,” said a ministry official, declining to be named.

The artillery firing came as the two Koreas were working to improve their relationship, which plunged to its lowest level since the sinking of the corvette Cheonan and the artillery attack on Yeonpyeongdo claimed the lives of 50 South Koreans last year.

Some experts raised the possibility that the firing was carefully calculated to achieve several goals.

They said that the communist state might want to see how the new command dedicated to safeguarding the five northwestern border islands would respond to North Korean provocations.

The command was established in June to better deal with North Korean provocations in the West Sea. The 5,000-strong command under the JCS control is now headed by the three-star commander of the Marine Corps.

Some others claimed that the North might have sent a warning ahead of the annual South Korea-U.S. joint exercise, which it has denounced for seeking to bring down its regime.

The Ulchi Freedom Guardian is scheduled to take place from Aug. 16-29. The command post exercise is based on computer simulated war games, which demonstrate the two militaries’ Operation Plan 5027 centering on a scenario of an all-out war with the North.

About a year ago, the North fired some 130 artillery rounds. Around 10 of them landed south of the NLL. Only three months later, the North launched the unprecedented attack on Yeonpyeongdo.