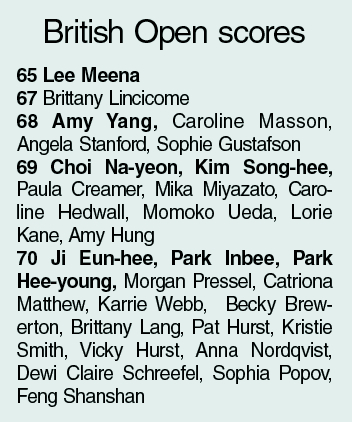 CARNOUSTIE, Scotland (AP) ― Lee Meena of South Korea overcame wet conditions and shot a 7-under 65 Thursday for a two-stroke clubhouse lead in the first round of the Women’s British Open.

She had seven birdies and no bogeys in a round played mainly in heavy rain.

Brittany Lincicome of the United States started her round early in better conditions and finished with a 67.

Twice a winner on the LPGA Tour in her first two seasons after turning professional in 2005, Lee is making her second visit to Scotland. She played in the British Open at St. Andrews in 2007.

“I like links golf,” Lee said. “It’s very different to what we play on the LPGA Tour and I really enjoyed it today, despite the weather.”
Lee opened with a birdie when she hit her 7-iron to 6 feet. She birdied the long sixth hole after hitting a sand wedge to 12 feet, made a 20-foot putt for birdie at the seventh and holed from nine feet at No. 9.

Putts for birdies from similar lengths followed at the 11th and long 14th. At the 17th, Lee hit two 5-woods to 45 feet and took two putts for her final birdie.

“I played really well,” she said. “I didn’t take advantage of some chances on the front nine, but then really got going from the 12th. This is a great golf course and it seems to suit my game really well, so I’m looking forward to the next three days.”

Morgan Pressel and three-time winner Karrie Webb shot 70s, one better than defending champion Yani Tseng of Taiwan. Cristie Kerr had a 72, while Michelle Wie had a 74.

American Kristy McPherson made a sensational start and reached the turn in 5-under 31, but faltered on the back nine and finished with a 71, the same as Natalie Gulbis.