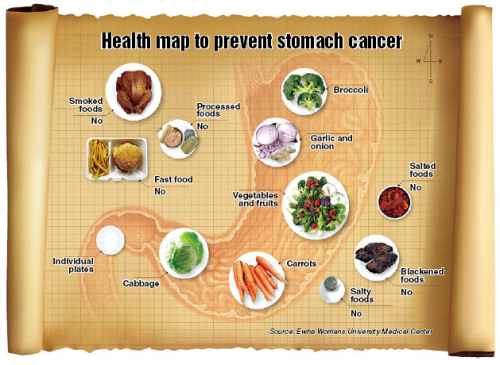 A malignant tumor in the stomach, gastric cancer, is the most frequently diagnosed cancer in Korea.

According to the National Health Insurance Corporation, 29,418 people were newly registered as gastric cancer patients in 2010, taking up almost 10 percent of the 218,884 new cancer patients that year.

The high prevalence of gastric cancer here is due to Koreans’ diet pattern, said Dr. Lee Ju-ho of Ewha Womans University Hospital. “Stomach stores the food we eat and digests it. Therefore, it is exposed to various disorders related to bad eating habits.”

He noted that along with diet, some other life habits including smoking could result in the prevalence of stomach cancer. Those who have gastric cancer patients in their families also have reportedly a higher chance of getting the disease, the expert said.

Lee said the best way to prevent the disease is to take regular health checkups for early detection. “If found at an early stage, the chances of surviving for more than five years after treatment is quite high. Those 40 years old or older should take regular endoscopic tests to look into their stomach,” he said.

Lee and his coworkers at the hospital’s cancer center developed a “Gastric Cancer Map,” a guideline of diet habits to prevent stomach cancer prevalence. They are:

1. Use individual plates rather than sharing the same dish.