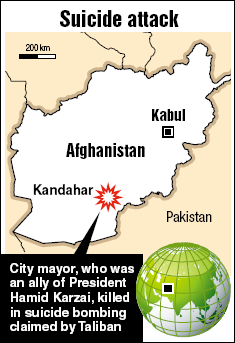 KANDAHAR, Afghanistan (AP) ― An assassin struck at the heart of President Hamid Karzai’s political machine in southern Afghanistan Wednesday, killing the mayor of Kandahar with an exploding turban and deepening a power vacuum in the Taliban’s main stronghold.

The slaying of Mayor Ghulam Haider Hamidi was the third killing of a Karzai associate in a little more than two weeks.

The attacks have jeopardized the Afghan government’s tenuous grip on the strategic south after recent success in routing the Taliban.

On July 12, a close associate gunned down Karzai’s powerful half brother at his home in Kandahar.

Five days later, Karzai’s inner circle suffered another hit when gunmen in Kabul killed Jan Mohammad Khan, a presidential adviser on tribal issues and a former governor of Uruzgan province, which is also in the south.

The 65-year-old, gray-haired mayor was slain inside a heavily fortified government compound just before he was to meet with local residents caught up in a land dispute, according to Mohammad Nabi, an employee of the mayor’s office. The attacker was holding a piece of paper and trying to talk to the mayor when he detonated a bomb hidden inside his turban, said Nabi, who witnessed the killing.

“After that, there was some shooting,” he said. “I hid behind a wall. The windows were shattered. There was dark smoke.”

In the aftermath, part of the attacker’s black and gray-striped turban was strewn on the ground next to a blood-spattered tree.

One civilian was also killed and another civilian and a security guard were wounded, the governor’s office said.

Hamidi was buried Wednesday evening in a family plot near Kandahar University. Karzai’s elder brother, Qayyum Karzai, was overcome with grief at the funeral.

The Taliban has claimed responsibility for the trio of killings. But the south is rife with tribal rivalries and criminals and it is not yet certain the group orchestrated the assassinations.

Taliban spokesman Qari Yousef Ahmadi called the killing a “big blow” to the Karzai administration. He told the Associated Press that the Taliban killed the mayor because he ordered the destruction of homes that city officials claimed had been illegally constructed. He said the mayor was killed to avenge the deaths of two children during the demolition work.

Kandahar Gov. Tooryalai Wesa said the two children were accidentally killed by a bulldozer knocking down the homes.

During his four years as mayor, Hamidi had campaigned against warlords and criminals and was particularly harsh on people who took illegal control of property, according to his son-in-law, Abdullah Khan. Just before the killing, the mayor had ordered more than a dozen large homes torn down in the north end of the city, saying they had been built illegally.

“From day one, I was afraid,” Khan told the AP in a telephone interview. “I wanted to put pressure on him to leave.”

He expressed doubt the authorities were up to the task of investigating the killing.

The president denounced the attack, blaming “terrorists who don’t want this country to be rebuilt.”

Gen. John Allen, the new commander of U.S. and NATO forces in Afghanistan, and Ryan Crocker, the new U.S. ambassador to Afghanistan, also condemned the assassination.

“Clearly a string of assassinations is not a good sign ... but at the same time, this could be a sign of significant weakness on the part of an enemy who has had a pretty darn hard year,” Crocker told reporters at his first briefing at the U.S. Embassy in Kabul.

“I don’t think you can chart a straight line that says that three assassinations guarantees a total unraveling either of international support or Afghan confidence. It could very well go the other way.”

Kate Clark, senior analyst with the Afghanistan Analysts Network, said the loss of another presidential ally in the south ― Karzai’s main base of political support ― could weaken the president there.

Insurgents are “doing very well if they’re managing to pick off these major figures,” she said. “These people are not easy to target.”

Hamidi, an accountant who also had U.S. citizenship and spent years living in northern Virginia, was considered an ally of Wali Karzai in Kandahar but he operated behind the scenes.

His name was mentioned as someone who might take over Wali Karzai’s unofficial position ― a master operator who played hard-line tribal and political factions against one another to retain ultimate control over the restive province.

However, some said his tribal contacts were not strong enough to assume that role.

“You can’t judge security through this single incident,” Razaq said.

“Kandahar is like a base for the insurgents so they will try to show their presence, but it doesn’t mean that we have lost control here,” he said.