1 million and up ? how number of expats rises without changing 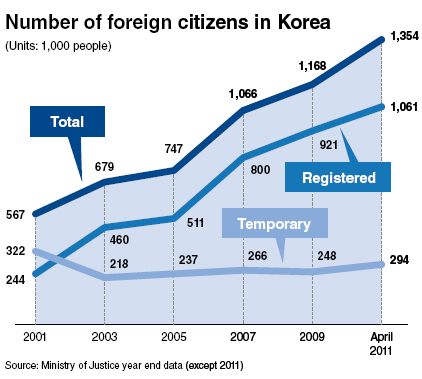 2010 marked the third year since 2007 when the number of foreigners in South Korea broke the 1 million mark -- a remarkable string of firsts announced by the Korean government.

In 2007, the Ministry of Justice issued a press release announcing “the generation of 1 million foreigners.”

The number included all foreign nationals in Korea, including tourists.

A 2009 release on a study the ministry did in partnership with the Ministry of Public Affairs and Security said: “Since the first results of our study into foreigners in the local districts in 2006, the number has risen each year and exceeded 1 million for the first time.” The figure included 925,000 registered foreign nationals, 77,000 naturalized Koreans and 100,000 children with who had at least one foreign parent or step parent.

Although it was clearer about what the number meant, news outlets such as YTN focused on the 1 million figure without mentioning the other one.

The Ministry for Public Administration and Security, which compiled each of the press releases based on Justice Ministry data, said different values were used each year because the government policy focus had changed. The changes just happened to coincide with a 1 million person landmark.

For example, in 2009, the policy focus was on providing services for multicultural families. While naturalized Koreans are not foreign nationals, MOPAS explained, they are the target of such policies, and were therefore included in the overall figures.

But the result is that media reports provide inconsistent data on the number of foreigners here, sometimes including Koreans with two Korean parents who happened to have divorced and remarried a foreign national. This makes it difficult to put information, such as the number of crimes committed by foreign nationals, into context.

On Wednesday, the ministry released a report updating the same figure, saying that 1.26 million people in Korea now fell into that category. It came out the same day as a report on complaints of racial discrimination and was used to put it into context.

However, this may be the only relevant data available.

The 2010 census did not collect data on ethnicity, and so Justice Ministry data appears to be the only data available on the numbers of different ethnic groups. Korea Statistical Information Service, which carried out the census, said it did not collect data on race because Korea’s ethnic minorities were small and had only started growing in the last few years.

The 1 million headline figure has featured near the top of all these press releases, but the number of foreigners here has increased steadily. There were 1.35 million foreign nationals here in April, compared to 910,000 at the end of 2006 and 566,000 at the end of 2001.

The number of registered foreign nationals has increased more dramatically, from 243,000 in 2001 to 660,000 in 2006 and 1.06 million in April. This figure excludes tourists and other temporary visa holders, but also excludes longer-term residents who have not registered.

Heejung Kim contributed to research for this article -- ed.