Korea has yet to cultivate culture of giving

“I have received too much during my life. I want to close my eyes after giving it back,” said Park No-ju, who had been living alone, suffering from thyroid cancer for years. She died at 77 early this month, probably satisfied with the thought that the money she left would be used to help people in need. Her neighbors recalled Park, living on benefits, used to sleep on winter nights without turning on a heater to save electricity.

“Park wanted her money to be spent on supporting students from poor families, in particular,” said Wang Seung-youn, an official at the Community Chest of Korea. “We are working on how to make the best use of her inheritance in consideration of her wish.”

Park is one of the 13 people who have so far joined a campaign launched by the charity to donate their personal assets after death. Of them, 11 are dependent on government support like Park, according to the official.

Even with a string of stories of poor people giving what they have to poorer neighbors touching the hearts of Koreans, the country still has a way to go to make charity more common and routine, experts say.

In terms of the amount, donations to charity in Korea have increased in recent years along with the growth in its economy. According to figures from the Ministry of Health and Welfare, the sum of donations more than tripled from 2.9 trillion won in 1999 to 9.61 trillion won in 2009, accounting for about 0.9 percent of the country’s gross domestic product. The GDP share of donated money, however, was just half the corresponding figures for the U.S. and other advanced countries.

Compared to the increase in amount, the number of individuals making donations grew at a slower pace, from some 430,000 in 2006 to slightly more than 594,000 in 2009, statistics from the National Tax Service showed. Donations by individuals amounted to about 1.51 trillion won in 2009.

Korea ranked 81st with Chad among the 153 countries listed in the 2010 World Giving Index compiled by the Charities Aid Foundation, a U.K. charity, based on a worldwide survey by Gallup. The index takes into account the percentage of respondents in the surveyed nations who have undertaken each of three charitable acts ― donating money, volunteering time and helping a stranger who needed help ― in the past month. Australia and New Zealand topped the list while Madagascar ranked the lowest. 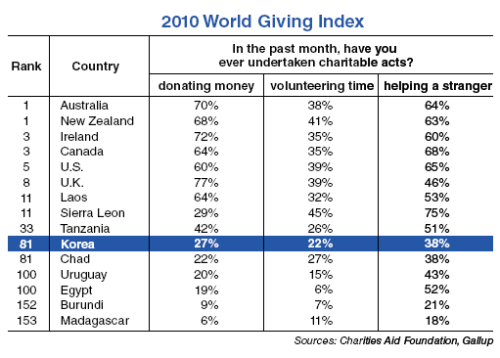 Some 27 percent of Korean respondents said they had donated money to an organization, with 22 percent having volunteered time and 38 percent having helped a stranger. The corresponding figures for Australia were 70 percent, 38 percent and 64 percent, respectively.

The sluggish level of donations by individuals has led charities to depend on corporations, especially big companies, for a larger part of their finance.

The Community Chest of Korea, the representative charity organization in the country, received some 1.3 trillion won in donations for five years from 2005. Of that, 844 billion won was given by corporations, while individual contributions totaled 238 billion won. The rest of the amount came from religious groups and government coffers. Such ratios were in sharp contrast to the U.S. and other advanced countries where individual donations usually account for 70 percent of funds.

Research by the Korea Institute of Public Finance suggested that about 17 percent of corporate donations in 2010 were made under compulsory circumstances rather than voluntarily. Noting that an excessive amount of corporate donations might hamper their competitiveness and growth, experts stress the need for expanding individual contributions, which will help enhance the cohesiveness of society.

“To spread culture of giving, measures are needed to encourage the rich to give more and to ensure balance between charity donations and religious contributions,” said the professor in a recent conference on donations.

Experts note that rich people, especially corporate owners, should assume more moral responsibility by opening their purses wider to help others. They indicate while corporate contributions have increased, personal donations by their owners have rarely been seen except for a few cases in which conglomerate heads pledged to give money to charity after facing criticism for raising slush funds or attempting to bequeath management to children through irregular means.

Of the 46 members of the Honor Society, who have given or pledged to donate more than 100 million won to the Community Chest of Korea, only one ― SKC chairman Chey Shin-won ― is from a family running a conglomerate.

In a Cabinet meeting last September, President Lee Myung-bak urged business leaders to make more personal donations in a move seen to back up his fair society campaign. “The real contribution by entrepreneurs is not to donate corporate money. They need to take more active part in spreading culture of sharing in personal capacity,” he said, citing the examples of Bill Gates and Warren Buffett, who have led other U.S. and global business leaders in a campaign to donate half their personal assets during their lifetime.

Lee became the first among all of Korea’s presidents to donate his property, worth 33 billion won in 2009, to establish a welfare and scholarship foundation. Some criticized Lee for failing to donate his assets to a charity organization and filling the executive board of the foundation with his family members and associates. But many people say his move should be given due credit for springing from good intentions. The Cheonggye Foundation, named after a stream Lee had restored while serving as Seoul mayor, gave 640 million won in scholarship to a total of 451 middle and high school students last year.

Critics say corporate owners should change their perception to identify company donations with personal contributions and pay attention to public views that they are more interested in enjoying privileges than assuming their social responsibility.

Chun Sang-jin, sociology professor at Sogang University, indicated the public want to see ideal types of entrepreneurs who have restored moral integrity, trying to communicate with other members of society.

Former Health and Welfare Minister Kim Sung-ho said more donations by those with wealth and power will be the most effective way to ease social polarization, making up for government’s efforts to strengthen support for the underprivileged.

In a new trend, an increasing number of individuals, most of whom are middle class, have made contributions to commemorate days that have special meanings to them and their families.

A senior citizen surnamed Lee in Seoul donated 50 million won to the Community Chest of Korea last year on the day he turned 88. A couple in Gimcheon, North Gyeongsang Province, gave 1 million won to a regional charity office to commemorate their daughter’s first birthday. Another couple living on Jeju Island contributed 10 million won to charity to mark the 30th anniversary of their wedding.

Inheritance donations still remain sluggish in Korea with experts citing Koreans’ deep-rooted wish to bequeath wealth to their descendants. In the 2010 survey by the Beautiful Foundation of 1,035 adults, only 12.2 percent responded positively to the idea of donating property rather than handing it over to their children. More than 65 percent said they had no intention to do so.

Experts propose a set of measures to increase donations, which include enhancing the transparency of charitable organizations, raising tax deductions on donated money and honoring donors in various forms.

A wide range of misappropriations involving officials at the Community Chest of Korea last year dampened the year-end charity drive, with the organization failing to collect its target amount for the first time in a decade. It disciplined 32 staff early this year and took measures to make its donation processes and expenditure more transparent. Regional branches of the organization have formed independent audit groups composed of professors, lawyers and ordinary citizens including housewives and students.

“Improving transparency in charity operation is a key to making more people give more donations,” said Son Bong-ho, professor emeritus at Seoul National University who had taken the lead in launching an association of about 190 institutions and groups related to charity last month.

The government recently added 39 more organizations including the Korean Red Cross and the Community Chest of Korea to the list of institutions, individual contributions to whom can receive 100 percent tax deduction.

In a move to put the rich, including corporate owners, under more pressure, some experts propose levying heavier inheritance taxes on those who have a poor record of donations to charity.

Setting up a pavilion and designating streets in honor of donors have been also proposed to induce wealthy people to make more donations.

Experts also raise the need for more effective means to provide potential donors with information on the people and places in most need of their financial support and volunteer work.

The Korea National Council on Social Welfare runs a website to offer such services, which can be logged on at www.nanumnet.or.kr