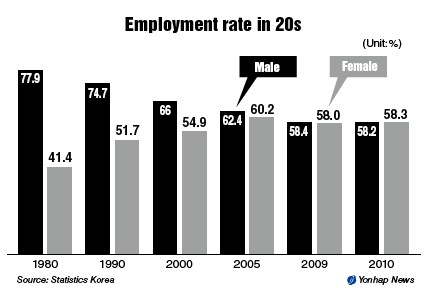 Overall job market still dominated by men, especially for workers in their 40s and 50s


Korea’s overall job market is still dominated by male workers. But when it comes to new jobs for Koreans in their 20s, the opposite is true.

The employment rate among women in their 20s hit 59.2 percent in the April-June period this year, slightly above men’s 58.5 percent, Statistics Korea said Wednesday.

The latest figure for twentysomething females here also marked an uptick from 57.5 percent in the previous quarter. The rate for males in their 20s was 57.3 percent during the same period.

Women in their 20s outnumbering men in the same age group for two straight months was seen as a sign that Korea’s jobs market was going through a fundamental change. The workforce is interpreted to be becoming more balanced, reflecting the greater role of women in society.

The country’s entire workforce is still lopsided toward men as the average employment rate for all age groups is 71.1 percent for men and 49.2 percent for women.

Although the reversal for women seems to be limited to a certain age group, the big picture tells a different story. One notable change is that not only are younger women seeking new positions, but women in their 40s and 50s are also actively venturing out of the home to land jobs, boosting the employment rate for those age brackets to a record high.

A sign of change came in the first quarter of 2008 when the employment rate for people in their 20s turned favorably for women, to 59.3 percent, while the rate for men stood at a tad lower at 59.2 percent.

Since then, a total six quarters have seen women in their 20s land more jobs than their male counterparts.

The latest figures illustrate how far Korea has come, particularly since the 1980s when the employment rate was 80 percent for men in their 20s and just 40 percent for women in the same age group.

In terms of the absolute number of employed workers, women in the cited age group have been outpacing men for about 10 years. Currently, 1.94 million women in their 20s are employed, higher than 1.74 million men in the comparable age bracket.

The so-called glass ceiling is breaking down everywhere, albeit slowly. A growing number of female job seekers are entering what have long been regarded as “men’s fields,” such as chemical, shipbuilding and heavy machinery.

The country’s military academies have also been pried open for female candidates, culminating in a sharp increase of women in key positions in the army, navy and air force bases.

State exams for government posts are increasingly dominated by female candidates. This year, 81 women were appointed as judges, accounting for 37 percent of all new judges. More than half of candidates who passed the grueling diplomat exams this year were women. In certain exams for public servants, women accounted for more than 60 percent of those who passed, helping turn the tide on the job market’s demographics.

The Samsung Economic Research Institute said Korean women in their 20s generally have had much improved qualifications in recent years, increasing the chances of landing a job. Another important factor behind the rising employment rate is that women in the age group showed more flexibility in selecting a company or position while men tended to take much more time in settling down in a new job.