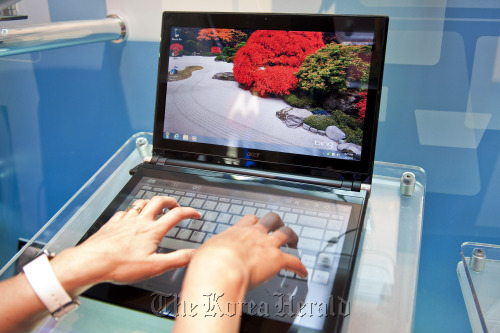 iPad’s advantages make it a threat to entire computer market


NEW YORK (AP) ― The response by computer makers to the iPad stealing sales from them: Make their PCs more like iPads.

The “if you can’t beat ‘em, join ‘em” strategy is prompting a wave of experimentation with the design of the laptop, which has been largely unchanged for two decades. Touch-sensitive screens and the use of Google’s Android system for mobile devices are two ways the PC industry is adapting.

About 50 million tablets are expected to be sold this year, and that could double to as many as 100 million next year. PC shipments worldwide grew just over 2 percent in the second quarter, short of what research firms IDC and Gartner had expected. The popularity of tablet computers was one of the main reasons.

One way PC makers are countering the threat is with iPad-style tablets running Android, but these haven’t seen wide success so far. And in trying to emulate the iPad, they’re competing with not just Apple, but also with phone makers such as Motorola Inc., which are launching their own tablets.

So PC makers are offering hybrids that try to offer the best of both worlds. Some are tablet-like devices that come with keyboards, which the iPad doesn’t have. Others are PC-like, combining the tablet’s signature touch-screen with the ability to run heavy-duty Windows programs for photo editing and design.

Witness the Acer Iconia, a Windows laptop that looks like any other when the lid is down. When you open it, you’ll find two touch-sensitive screens and no keyboard, similar to a tablet computer. To type, you bring up a virtual keyboard on the lower screen. If you’re not using the keyboard, Web pages can flow from the top screen to the bottom one.

Another iPad-like laptop is the Dell Inspiron Duo. Its screen can be flipped around to face outward when the lid is closed. When folded that way, it works like a tablet.

Lenovo Group also sells a Windows laptop with a screen that can be detached from the keyboard to function as an Android tablet.

“We should learn some things from tablets,” such as the iPad’s user-friendly interface and the ease of installing software from outside parties, said Yang Yuanquing, the CEO of Lenovo, the world’s fourth-largest maker of PCs.

Hewlett-Packard Co., the world’s largest maker of personal computers, is giving its PCs the ability to run applications written for its webOS software, which runs on smartphones and a tablet, the TouchPad.

In their experimentation, PC makers are reviving designs haven’t been very successful in their previous incarnations. The laptop with a screen that detaches to become a tablet is an idea that dates to 2002, when a flurry of tablet computers debuted along with Microsoft Corp.’s Windows Tablet Edition.

This earlier generation of tablet PCs didn’t catch on because they were expensive and too heavy for comfortable use in tablet mode. “Windows Tablet Edition” wasn’t much different from regular Windows, and it wasn’t fully adapted for tablet use. Microsoft added more touch-oriented features when it released Windows 7 in 2009.

Even with the improvements in Windows, however, the PC faces hurdles in mimicking the tablet’s design.

Windows isn’t a very friendly operating system for tablets, partly because it needs Intel-style processors to run on. These chips drain batteries much faster than the cellphone-style chips used in the iPad, with a core designed by ARM Holdings PLC. ARM chips can save power by turning off parts of themselves when they’re not in use, among other tricks.

“A lot of what makes the iPad an iPad is the long battery life,” technology analyst Rob Enderle said.

Windows-based PCs and tablet computers that use Intel chips need bigger batteries, which make the devices heavier. Even then, the batteries don’t last as long as the iPad’s. The Dell Inspiron Duo weighs 3.4 pounds, or two and a half times the weight of the iPad. It has four hours of battery life, compared with 10 on the iPad.

Microsoft is hard at work developing a version of Windows that will run on ARM chips, and it’s expected to be ready next year. That means the next generation of laptops could match the iPad for weight and battery life.

But while waiting for the new software, PC makers are in an uncomfortable situation. The new software might be what they need, but in the meantime, they have to try other means to distract consumers from the iPad, such as borrowing tablet features. These experiments with laptop-tablet hybrids are unlikely to be as important as the advent of the new system, currently dubbed Windows 8. But something might stick, providing a model for the future of PCs.