In the waiting room of one internal medicine clinic in Seoul, an inconspicuous pair of investigators is conducting a sting.

These sleuths do not have fedora hats or trench coats, but designer purses, blouses, and most importantly, a camcorder hidden out of sight.

Kim, the veteran of the two, exhibits such nonchalant behavior in the clinic that it is hard to suspect that she has an ulterior motive other than a checkup. She is trying to prove that the clinic is colluding with a neighboring pharmacy.

“The first time I went out with a camcorder, I was absolutely terrified, stuttering and speaking nonsense,” said Kim, who declined to give her full name.

But Kim did not even bat an eyelid during her interview with The Korea Herald inside the waiting room, adding that she makes over 10 million won ($9,400) a month.

The 51-year-old is but one of a growing number of people teeming into what are known as paparazzi academies to learn the trade and make big bucks, while fixing society’s ills.

Kim, who works at a well-known paparazzi school in Gangnam, was actually taking one of her students, Kwon, out on a field exercise. 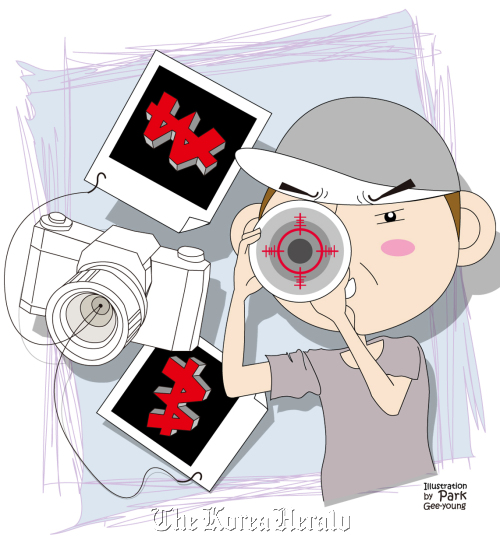 According to Moon Seoung-ok, executive managing director at the school, the future of citizen reporting looks bright as reward programs are continually being added by both the government and corporations.

Currently there are 336 different infractions that citizens can report to both government agencies and corporations, offering up to 3 billion won.

The over 7,000 graduates of Moon’s school cover the entire spectrum, from a couple who report litterers at highway rest stops, to people who stake out hospitals and catch perpetrators of health insurance fraud.

Not surprisingly, many people encounter infractions in their everyday business without even knowing it.

Even during Kim’s sting, the clinic committed two major crimes that could have amounted to more than 100 million won in rewards.

And many of Moon’s paparazzi target clinics in particular, which according to Moon are especially prone to commit tax evasion, usually resulting in 100 million won per case.

“The second they give you an excuse for not being able to give you a cash receipt, you got them,” said Kim.

But some rewards are not as easy to come by.

Adult video game parlors, usually gambling facilities run by crime gangs, are illegal, but can be extremely dangerous to paparazzi if caught by the wrong people during a sting.

According to Moon, the fact that police are sometimes found tipping off criminals motivates him to exclude officers from the equation and report parlors to higher authorities.

“We are doing what the police won’t, cut the problem at its roots,” said Moon.

Aside from possible beatings, there is so much money to be made, it is no wonder hopeful housewives, students and the jobless are attracted to the thought of catching someone red-handed.

“The financial factor is definitely a big reason,” said Koh, who just enrolled at Moon’s school.

“I used to work at a corporation but with the economy I had to find another job, and with the resulting less amount of pay, I wanted to find something else that can meet my financial needs,” said the 38-year-old breadwinner for three.

Kwon, who had just graduated from the program, was hesitant about the idea to begin with.

“When I first heard about paparazzi, I thought that it was something that caused harm to others, but I realized that it is not causing harm, but rather relieving those that are victims of perpetrators,” said 55-year-old Kwon.

As noble as their cause may sound, society’s view of these bounty hunters is not as positive, which paparazzi are well aware of.

“This job is not something that I can confidently tell others because society still doesn’t view this line of work very highly,” said Koh.

Many believe the system creates distrust among neighbors.

Several countries have citizen watch programs but perhaps the most infamous is the Inminban, a North Korean neighborhood snitch program where people are encouraged to report illicit behavior of people they know.

But despite the negative social perception, the government has seen the program as such a success that it is spearheading for more rewards.

According to the Ministry of Education, Science and Technology, since its illicit hagwon reporting program began over two years ago, some 3.4 billion won has been awarded to whistleblowers.

The Seoul Metropolitan Government has also hailed its policies as a success.

“We have received great help from citizens who steadily report offenders to us,” said a city official.

Just recently, the Environment Ministry announced a new reward system, where a whistleblower may report households and restaurants that illicitly bury or incinerate trash. Depending on the severity of the infraction, the ministry may reward up to 3 million won.

“Those who report families found to be illegally burying or incinerating trash, or factories that do not have dust control facilities will be given a reward after confirming the infraction and its perpetrator,” said a ministry official.

The ministry decided that its original reward system was inaccessible to the general public and only allowed occupational paparazzi to profit, so they have expanded its rewards to invite a larger demographic.

Only time will tell if such programs cause people to think twice before breaking the law.

“I’m not someone important but I feel like if I can tell my neighbors one by one that what they are doing is wrong, I believe that we can live in a cleaner society,” said Kwon.