The Bank of Korea said it kept the benchmark base rate at 3.25 percent at a monthly monetary policy committee meeting ― a move that was widely expected in the market following a surprise quarter percentage point hike last month. 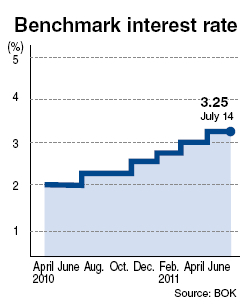 “The BOK froze the rate as the bank needs to gauge the impact of the rate hike and to check economic conditions at home and abroad,” Gov. Kim Choong-soo said at a press conference in Seoul.

Kim said the Korean economy is headed for solid growth, helped by robust exports, but pointed out the sovereign debt crisis spreading precipitously in Europe and the slowing U.S. economy as “major downside risks.”

The central bank’s latest pause came after it had raised the borrowing costs by a combined 1.25 percentage point since July last year.

Given that back-to-back rate hikes are generally rare, Thursday’s decision did not deliver any shock to the market, but analysts said the central bank should pick up the pace to combat worrisome inflation.

“The current interest rate of 3.25 percent is abnormally low by any standard, especially considering that a neutral figure should be about 4 percent by now,” said Yu Jae-ho, an economist at Kiwoom Securities. “The central bank should have begun normalizing the rate last year but it focused too much on the economic growth, thereby failing to put a tight rein on inflation in time.”

For July, however, the central bank has shifted its eyes toward external factors that could pose a greater threat to Asia’s fourth-largest economy. As for U.S. Federal Reserve Chairman Ben Bernanke’s comments on Wednesday that the U.S. economy might need extra stimulus measures, Kim acknowledged an increase in global liquidity caused by quantitative easing in the U.S. could impact the markets around the world. However, he stopped short of elaborating on how it could affect the Korean economy, just adding that more details are needed.

The governor expressed a clearer stance when it comes to the fast-spreading sovereign debt problem in Europe: “The eurozone debt crisis would have a limited impact on the Korean economy, but if the problems get serious, they could have a considerable effect on Korea indirectly, as large part of foreign capital comes from Europe.”

Internal factors are not entirely favorable, if not more serious, with the country’s economic growth set to be lower than previously expected and the inflation rate accelerating at a faster pace. The Ministry of Strategy and Finance recently cut the nation’s projected economic growth rate to 4.5 percent this year, down from an earlier forecast of around 5 percent, while marking up the consumer prices forecast for this year from 3 percent to 4 percent.

The central bank said consumer prices will continue to rise in the coming months due to higher food prices, demand-side pressures from an economic recovery and heightened inflation expectations.

With public utility rates set to be raised soon, the case for more decisive rate hikes to put inflation under control is likely to gain traction at the central bank in the coming months.