Lee, a 30-year-old computer engineering graduate, has been jobless since he graduated from a university in Anyang, Gyeonggi Province, more than a year ago.

There seemed to be a lot of job openings in the information technology industry, but for some reason, he did not feel he was qualified for most of them.

“In some interviews, I couldn’t answer technical questions about computer engineering,” he said.

Universities and colleges churn out nearly 60,000 graduates in IT-related majors every year. But IT firms complain of difficulty in finding the right staff.

“There is a mismatch between the skills of job applicants and the skills that we need,” said a human-resources official at Hyundai Powertech, a local maker of auto parts.

His company, which mostly hires engineering majors, has no other option but to invest in education and training of new recruits before putting them to work, he said.

The problem is not confined to technology sectors.

Korean companies spend an average of 62 million won and 20.3 months on training graduates after hiring them, according to a study conducted by Korea Employers’ Federation.

Experts attribute this problem to the falling quality of university education.

“University students in Korea pay some of the highest tuition fees but receive one of the poorest education services (compared to other members of the Organization for Economic Cooperation and Development),” Lee Young, a professor at Hanyang Univeristy, said.

The nation’s average cost of university tuition is $8,519 at private institutions ― which account for 80 percent of all colleges ― and $4,717 at public universities, according to OECD figures adjusted for purchasing-power parity. Only schools in the United States and Denmark charge higher fees.

A key measure used to evaluate education quality is the student-faculty ratio. The OECD average is 16.2 students per full-time teaching staff, according to its report Education at a Glance 2010. No Korean data is offered in the report, but local statistics put the number for local universities at 24.9. 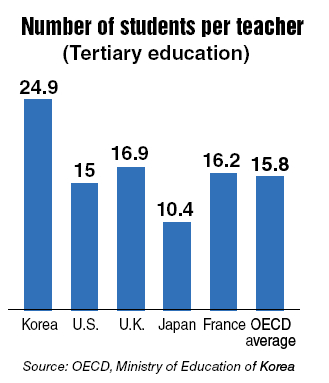 In another indication of the poor educational service, the average number of library books per student at top 20 universities in Korea stands at 70, fewer than the 71 which is the smallest figure among 113 American universities surveyed by the Korea Education and Research Information Service.

In the IMD World Competitiveness Yearbook 2011, Korea came in 39th out of 59 countries in terms of the extent to which university education meets the needs of a competitive economy, one of the criteria for measuring the quality of higher education. It scored 5 out of a possible 10.

However, the nation’s overall competitiveness of education was marked 29th in the survey, greatly boosted by having the second-highest rate of tertiary education completion.

Lee’s predicament is likely to be shared by a growing number of fellow engineering graduates.

Samsung Economic Research Institute, a Seoul-based think tank, projected that Korea will have an over-supply of 30,000 holders of Bachelor’s degrees or higher in the IT field between 2010 and 2014. Nevertheless, 46,000 IT jobs will remain untaken, because of a shortage of the right skills, it said.

“A lot of problems in the nation’s job market for the youth may be solved by tackling the mismatch” between the skills of the unemployed and the jobs available, said Minister of Knowledge Economy Choi Joong-kyung.

His ministry is working on a set of measures aimed at raising the bar for IT education at universities. One of the steps calls for engineering majors to earn more than 60 percent of the credits required for graduation in their major. Currently, the required proportion of credits is around 50 percent, the ministry said.