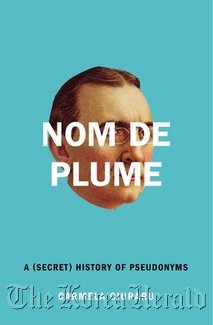 In the annals of literature, pen names have long created as much intrigue about the authors as the pieces they write.

Carmela Ciuraru‘s “Nom de Plume” deftly tells the stories of some of literature’s most famous pen names by weaving in details about these secretive, often eccentric writers‘ lives and works to examine their decision to use pen names. From Lewis Carroll (born Charles Dodgson), to Mark Twain (Samuel Clemens) and Victoria Lucas (Sylvia Plath), one chapter is devoted to each with so much detail that the authors under discussion seem to become characters in Ciuraru’s book.

Take the title of Plath‘s chapter: “She found sexual satisfaction in picking her nose.”

For anyone who creates — writers, artists and performers — the book will enthrall. It’s as much a meditation on the creative process as it is a tell-all about their names and the intrigue, branding or mind games that created them.

Ciuraru devotes pages to exploring the reasons for — and effects of — these other identities. She’s done much research for this book, weaving in the authors‘ personal and public writings, along with those of their contemporaries.

One shortcoming of “Nom de Plume” is its lack of conclusion. The book is told as a series of short works on these authors and many similarities among them pop out, beyond their pen names. Ciuraru expertly tells their stories and draws conclusions within each section, but other than the introduction, there’s no explanation to bring the examination full circle.


Memoir on search for identity

Thoughts Without Cigarettes: A Memoir
By Oscar Hijuelos
(Gotham Books) 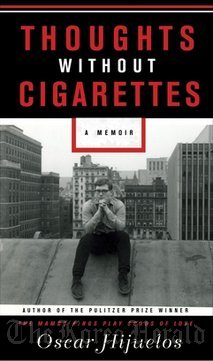 In his novels, Pulitzer Prize winner Oscar Hijuelos captures the loss and triumphs of Cuban immigrants in tales of displaced dreams, lovelorn beauties and eternal music. Now he turns the pen to his story, the inspiration for many of his characters, and a candid, often heartbreaking portrait that reveals another layer of the Cuban experience in America.

Growing up in New York, Hijuelos‘ identity as a Cuban seems constantly stacked against him. With his blond hair and light skin, he is commonly confused as a German or American.

After an enchanting trip with his mother to Cuba as a young child, he becomes ill with a kidney disease and is hospitalized for a year, during which he loses, and never truly recovers, his Spanish.

“For the longest time, all I would know was that I had gotten sick in Cuba, from Cuban microbios, that the illness had blossomed in the land of my forebears, the country where I had once been loved and whose language fell as music on my ears,” Hijuelos writes.

His life is rich with stories and characters that later populate his novels — his mother, a beautiful, creative woman who meets her future husband selling tickets at a movie theater in Cuba and later follows him to New York, and Hijuelos‘ father, a jubilant but tormented soul from the Cuban countryside who narrowly scrapes by a living for his family as a hotel cook and whose premature death from a heart attack, before his youngest son can truly know him, leaves a lasting mark.