The automated boats will sail at a speed of up to 90 kilometers per hour within a 16 kilometers radius and avoid collisions with other vessels or obstacles, the Ministry of Land, Transport and Maritime Affairs said in a statement. The state-funded Korea Ocean Research & Development Institute will join the project.

Under the plan, the ministry plans to pump 13.5 billion won into the design and development of core technologies such as autonomous navigation and remote control systems through 2013. It will then focus on the test-run and commercialization stages.

“The project will help secure base technologies for unmanned surface vehicles by integrating Korea’s leading technologies in information technology and shipbuilding, and establish infrastructure for the future oceanic industries such as sea monitoring, research and leisure,” a ministry official said.

The USVs date back to World War II, but it was only in the 1990s that they saw significant growth, largely boosted by technological innovation and increased military interest.

The ships have recently drawn attention from civil and defense sectors not just for their obstacle avoidance and path planning capacities but for use in supplying humanitarian aid and capacity for search and rescue missions in the face of natural disasters. 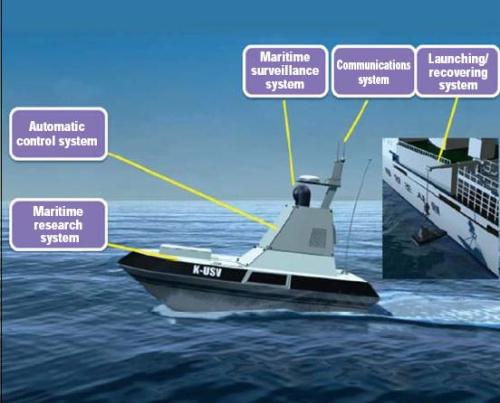 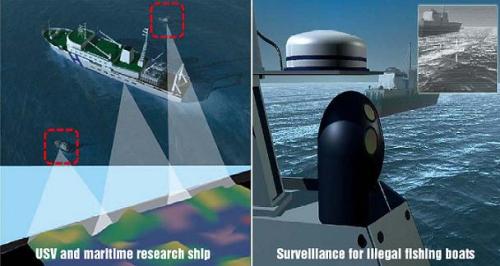 In Korea, the USVs will be able to conduct marine research and surveillance for illegal fishing in real time, the ministry said, while preventing fatigue-related accidents for crews.

The world market for the robotic vessels is expected to reach around $10.3 billion by 2019, in which advanced economies such as the U.S. maintain the lead.

The U.S proceeded with a $53 million project to set up unmanned surface systems. It chalked out a master plan for USVs for its navy in 2007, citing their “ability to reduce risk to manned forces and to perform tasks which manned vehicles cannot.”

Japan’s Yamaha Corp. developed two USVs in 2003 primarily to monitor biogeochemical and physical parameters of the ocean and atmosphere.

Though much focused on military objectives such as countering naval mines, their program also includes unmanned maritime vehicles, protecting harbors and communicating underwater.