The blasts, one of which was caused by a suicide bomber, occurred just after midnight in an area of the city that is home to political offices and army housing. 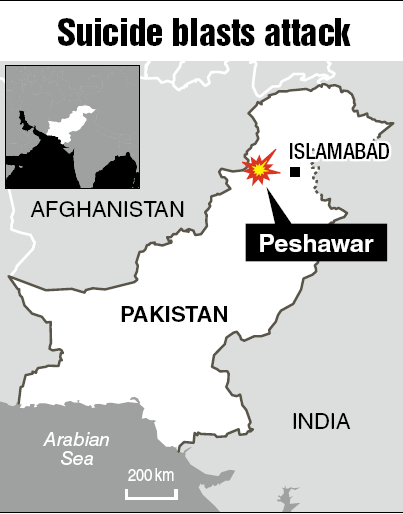 The attack took place as CIA Director Leon Panetta and Afghan President Hamid Karzai visited Islamabad, 150 kilometers to the east, to speak separately with senior Pakistani officials about intelligence sharing and efforts to reconcile with the Taliban.

The first explosion was relatively small and drew police and rescue workers to the site, said Dost Mohammed, a senior local police official. A large explosion rocked the area a few minutes later, causing the fatalities and injuring 98 people, 18 critically, said Rahim Jan, a senior doctor at a local hospital.

The second blast was caused by a suicide bomber riding a motorcycle packed with 10 kilograms of explosives, said Ejaz Khan, a senior police official. The source of the first explosion was unknown.

No group claimed responsibility, but the Pakistani Taliban have pledged to carry out attacks in retaliation for the covert U.S. Navy SEAL raid that killed bin Laden in an army town outside Islamabad on May 2.

Saturday’s attack took place across the street from the offices of the top political agent to Khyber, part of Pakistan’s volatile tribal region, and only about 100 yards from army housing units. Peshawar borders the tribal region and has been repeatedly hit by bombings over the past few years.

The dead included at least one journalist, said Mohammed Farooq, a hospital doctor. Another four journalists and at least 10 police were injured, he said. Many of the people killed were so badly burned they were difficult to identify.

Jamal Khan, a 22-year-old student, was in his apartment when the first blast went off. He rushed to the scene as the second explosion occurred, peppering his face and arms with flying debris.

“The explosion was so huge I will never forget it all my life,” said Khan as he recovered in a hospital. “It was deafening, and then there was a cloud of dust and smoke. When the dust settled, I saw people crying for help and body parts scattered everywhere.”

The attack followed a second day of meetings between Panetta, the CIA chief, and senior Pakistani officials. The talks were slated to focus on the size and scope of U.S. intelligence activities in the wake of the raid that killed bin Laden, said a Pakistani official, speaking on condition of anonymity because of the sensitivity of the issue.

The bin Laden operation plunged an already strained relationship between the CIA and Pakistan’s main intelligence agency, the ISI, to new lows and threatened cooperation that is key to the U.S. fight against al-Qaida and Taliban militants battling foreign troops in Afghanistan.

The U.S. also needs Pakistan’s help to promote and guide negotiations with the Taliban that can help end the decade-long Afghan war. Pakistan and Afghanistan inaugurated a joint peace commission Saturday during a visit by Karzai, the Afghan president.

In an attempt to rebuild their relationship, Washington and Islamabad have agreed to form a joint intelligence team to track down militant targets inside Pakistan, drawing in part from the trove of records taken from bin Laden’s personal office during the raid.

But new suspicions have marred this attempt at renewed cooperation.

As an act of faith to restore relations with the Pakistanis, U.S. intelligence shared the suspected location of explosive material held by the al-Qaida-linked Haqqani network at two compounds in the Pakistani tribal areas, according to a Pakistani and a U.S. official.

The U.S. official said that after the intelligence was shared, the explosive material was moved. The Pakistani official told The Associated Press that they checked out the locations, but nothing was there, and that they intend to investigate to dispel U.S. suspicions that the Pakistani intelligence service had tipped off the militants.

Both officials spoke on condition of anonymity to discuss intelligence operations.

Panetta’s visit is his first to Pakistan since the bin Laden raid. His ties with Pakistan will be key in his new role as U.S. defense secretary, presuming he is speedily confirmed by Congress.

The U.S. wants the proposed joint intelligence team under discussion Saturday to pursue a list of five high-value targets it handed to the Pakistani leadership recently. The target list included al-Qaida’s military operations chief in Pakistan, Ilyas Kashmiri, who was reportedly killed by a drone strike in the Pakistani tribal areas June 3.

Karzai pressed Pakistan for support in facilitating negotiations with Taliban militants with whom the Pakistani government has historical ties.

There is a significant level of distrust between the two countries, but Pakistan promised to help as Afghanistan sees fit.