But thousands of students gathered Friday at Chonggye Square, calling for the government to cut their tuition fees.

“Half-price tuition, half-price,” shouted the crowd sitting on the ground, holding a candle in each hand.


Friday’s gathering came at the peek of recent student protests against the government, calling on the government and the ruling Grand National Party to keep its promise to halve college tuition.

Unlike the original pledge, however, the new GNP plan aims to slash college tuition in half only for students from households in the bottom 50 percent income bracket.

Students, nongovernmental organizations and opposition politicians took to the streets in central Seoul, criticizing the government and the GNP party for paying lip service ahead of next year’s presidential election.

“Like me, many students can’t afford to pay tuition fee, so have to take a student loan. I came out here because the situation is getting worse,” said Chung Tae-young, 22, a junior at a Seoul university.

Joining the college students on Friday were also 40- and 50-somethings sitting side by side with the students.

“I came here because I feel responsible for this happening,” said Moon Byung-joon, 54, an office worker.

“Many students are having difficulty repaying their tuition loans. I think it is our responsibility for ignoring their plight,” he added. 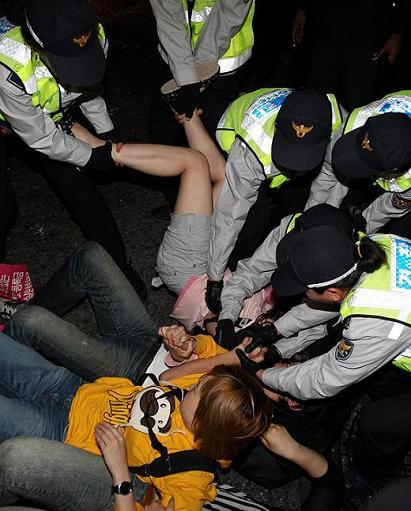 Organizers estimated the crowd at 15,000 but police put it at 5,000.
The government deployed about 3,000 police around the rally site in a massive show of force against possible violence.

Some seventy students were arrested by the police after holding a surprise demonstration near the presidential office, Cheong Wa Dae.

The candle light vigil Friday was led by a nationwide network of people concerned about the high tuition fees, a national alliance of college students and the four opposition political parties. They urged the police to “guarantee a free and peaceful rally.”