He looked gloomy receiving a group of top officials from the then ruling Uri Party at his office in May 2007.

“I have never seen democratic reformist forces split like this,” said Kim Dae-jung, the former president, in a subdued voice. He was referring to the wrangling between the Uri Party and other liberal groups, which originated from a political party he had set up to back his fourth presidential bid in 1997.

“Our people have supported the two-party system,” Kim said, asking for the merger of liberal and progressive forces against the then main opposition Grand National Party advocating conservative values and policies.

His remarks reflected growing concerns that the divided liberal camp would lose the presidential election in late 2007 to the GNP, which was gaining voter support with then President Roh Moo-hyun of the Uri Party becoming increasingly unpopular with the public.

The crushing defeat, followed by another humiliating loss in the 2008 parliamentary elections, plunged the left into a sense of deep resignation that it would have to remain on the opposition benches far longer than it had been in power.

The opposition camp has since been diversified into four groups ― the Democratic Party reinvented from the UNDP, the People’s Participation Party composed of figures loyal to Roh, who jumped to his death in May 2009 amid a corruption probe targeting his associates, the New Progressive Party and the Democratic Labor Party.
Despite their stances against the ruling GNP, the four parties are in different positions on the ideological spectrum with the DP pursuing the centrist line, sometimes leaning slightly left, and the DLP taking the far-left stance. The PPP and the NPP are located between them.

Since Kim died months after Roh’s suicide, no one has sounded so authoritative in urging the unity of political forces against the conservative ruling party with 172 seats in the 299-member unicameral parliament. Going through a string of by-elections and local polls, however, the opposition groups have increasingly realized the necessity and effect of their collaboration.

In the latest round of by-elections in April, the four opposition parties came so far as to field unified candidates in the four major contests for three parliamentary seats and one gubernatorial post. The election alliance brought the opposition camp wins in all the races except for a parliamentary by-election in Gimhae, South Gyeongsang Province. DP Chairman Sohn Hak-kyu defeated former GNP leader Kang Jae-sup in the Bundang constituency on the southern outskirts of Seoul, whose voters had elected candidates only from the conservative party to the National Assembly since its establishment in 1996.

The outcome reassured the liberal and progressive forces that they could vie neck and neck with the GNP or perhaps beat the ruling party in next year’s general and presidential elections if they resorted to a formula like that applied in the April 27 by-elections.

Such perception has prompted opposition groups to seek ways to merge themselves into a single party or consolidate their election alliance. “This is not the win of our party but the victory of the solidarity (of opposition parties),” said Sohn at a meeting of party executives days after the by-elections.

A recent poll of 1,000 voters across the nation raised a more urgent need for the opposition camp to join forces especially in the next presidential election. According to the survey conducted by a local daily and Media Research, over 42 percent of the respondents favored former GNP Chairwoman Park Geun-hye as next president. Support for opposition presidential hopefuls was far behind Park’s ― 10.2 percent for Sohn, 6.2 percent for Rhyu Si-min who heads the PPP, 3.3 percent for Moon Jae-in, former chief secretary for late Roh, 3.2 percent for ex-Uri Party chief Chung and 2.8 percent for former Prime Minister Han Myeong-sook. 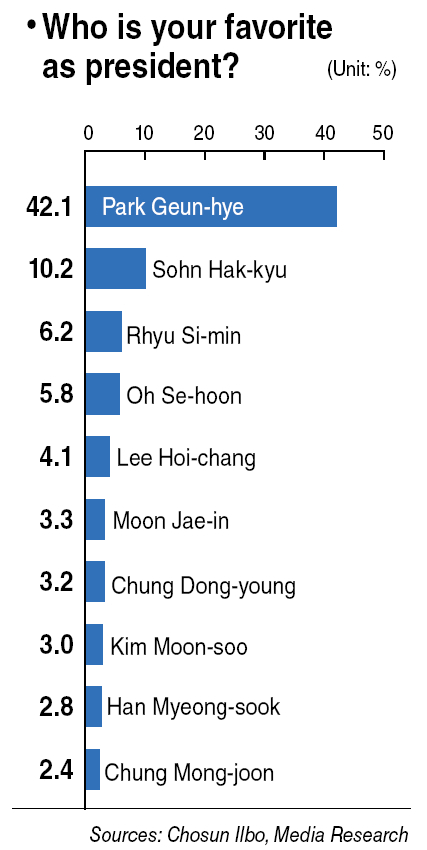 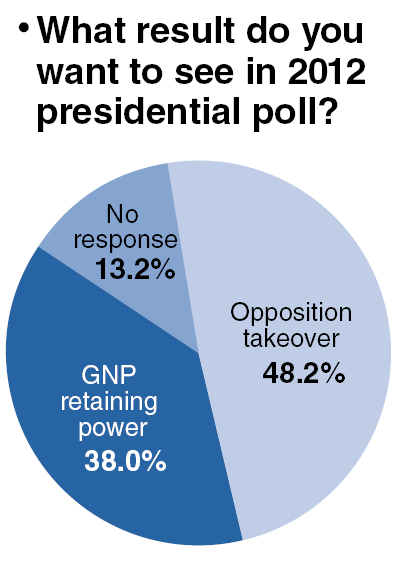 Approval ratings for other potential presidential runners in the GNP also remained at a single-digit level ― 5.8 percent for Seoul Mayor Oh Se-hoon, 3.0 percent for Gyeonggi Governor Kim Moon-soo and 2.4 percent for Rep. Chung Mong-joon. Rep. Lee Hoi-chang, who ran in the 1997 and 2002 presidential races as a GNP candidate and later created the conservative Liberty Forward Party, received support from 4.1 percent of the respondents.

Although there is a high approval rating for Park, who is certain to grab the GNP’s presidential ticket, nearly half of those surveyed hoped to see power transferred to the opposition in the December 2012 presidential election. Only 38 percent said they wanted the GNP to retain power.

Political analysts say the voter sentiment suggests the possibility of Park’s lead being caught up with by a candidate supported by all opposition groups. “If and when the presidential race is boiled down to a duel between Park and a single opposition runner, it is highly likely that they will engage in a neck-and-neck competition,” said Kim Ji-yun, executive director at Media Research.

But many political observers note it will not be so easy for opposition groups with different and even conflicting interests and ideologies to go as far as to merge into a single larger party. Let alone fielding a unified presidential runner, they say, it will be a daunting task for opposition parties to agree on a list of unified candidates to compete with ruling party contenders in the 245 constituencies in parliamentary elections scheduled for April.

DP leader Sohn and his aides have been aggressive in pushing for the merger of all opposition parties, which they believe will boost Sohn’s prospects in his possible showdown with Park. “The integration of the democratic and progressive forces has become an inevitable task for us,” Sohn said in a radio speech in May.

Lee In-young, a Supreme Council member, who has led the DP’s efforts to strengthen solidarity with other opposition groups, emphasized only a single larger opposition party could guarantee a win against the GNP in the upcoming crucial elections. He hoped to work out the framework for binding together all opposition groups by September, when the DP should begin focusing on preparing for its national convention in December.

But the three other smaller parties have reacted coolly to the DP’s initiative. They appear to prefer consolidating themselves first before negotiating with the main opposition party on their merger or election alliance.

The left-leaning DLP and NPP, which broke with each other in March 2008 due to differences over North Korea’s hereditary power transfer, have engaged in negotiations on their reintegration since January.

The negotiations made progress last week when officials from the two parties and representatives from progressive civic groups agreed on major policies that would form the basis of the charter and platforms of a new extended progressive party. The DLP, sympathetic with the North Korean regime, and the NPP, critical of it, reached a compromise on the issue of the power transfer from Kim Jong-il to his third son Jong-un with a vague statement that “we respect the public’s view the North’s power succession is difficult to understand and a critical stance should be taken on the matter.”

Based on the agreement, the two parties plan to accelerate their negotiations to launch a new progressive party by September. In their agreement, they made no mention of the merger with other opposition groups but left open the possibility of forming election alliance based on the shared “values on major policies for overcoming neo-liberalism.”

The PPP, which was created in January, has been courted by the DP, while their bid to court the two leftist parties has so far been largely ignored.

DP officials have said it is natural for their party and the PPP to be united as the two sides share the same political roots that date back to the inauguration of the nation’s first liberal government led by Kim Dae-jung. PPP leader Rhyu appeared to have moved closer to merging with the DP right after his party’s candidate, who had been picked as the single runner representing the opposition camp, lost to a GNP contender in last April’s parliamentary by-election in Gimhae. Rhyu has since then remained silent on the issue while the PPP has continued expressing its intention to join the negotiations on launching a new progressive party.

The two left-leaning parties have held back on a formal response as they are weighing the true intentions of the PPP. Some analysts see that the PPP may attempt to use its integration with the two other splinter parties as leverage to draw more concessions from the DP in the eventual negotiations on their merger.

Sohn’s move to put all the opposition groups within the same fold has also faced resistance from some of his party members, especially lawmakers elected from constituencies in the DP’s stronghold of Jeolla Province.

“Everyone will die if a different type of blood is transfused into one’s body,” said Rep. Kim Dong-cheol at a meeting of party lawmakers last week. Echoing Kim’s view, another DP lawmaker, who requested anonymity, said the merger with the DLP which insists on recognizing North Korea’s hereditary power succession would be nothing but a way of “dying together.”

Rep. Jang Se-hwan said it would become harder, probably impossible on some issues, to coordinate different views within the merged party with such a broad ideological spectrum.

Political observers note that behind DP lawmakers’ negative attitude may be concerns that they may have to make concessions to members of other splinter parties, including candidacies for parliamentary elections particularly in Jeolla districts. Coupled with the internal resistance, the time limit appears to make it implausible to complete the negotiations on the merger of all opposition groups by this fall.

Noting it took nearly half a year for the DLP and the NPP, which have little difference in policies except for those on North Korea, to work out the framework for their merger, a DP official said it would be inconceivable for the centrist party and the two leftist groups to complete merger talks by this autumn as scheduled by Sohn and his aides.

Choi Jang-jip, professor emeritus of politics at Korea University, who heads a group of supporters for Sohn, also expressed a pessimistic view on the formation of a unified opposition party. In a recent interview with a local daily, Choi proposed opposition parties strengthen their election alliance next year and form a coalition government after seizing power.

If a single larger opposition party turns out to be impossible to achieve, the cloud of doubt will hang over the opposition in the lead-up to next year’s presidential election that anything short of their merger will secure their win. Park is beginning to accelerate moves to prepare for her second presidential bid following a meeting last week with President Lee Myung-bak who seemed ready to throw his weight behind Park, leaving past conflicts behind them.