BEIRUT (AP) ― Armed men killed 120 Syrian security forces and torched government buildings Monday in a northern region where troops have unleashed deadly assaults on protesters for days, Syria said. The government vowed to respond “decisively,” hinting at an even more brutal crackdown by a regime known for ruthlessly crushing dissent.

If confirmed, the attack in the north would be a turning point in what so far has largely been a peaceful uprising threatening the 40-year rule of President Bashar Assad and his family.

Opposition activists were skeptical of the official casualty toll, saying the authorities were setting the stage for a new onslaught. But even they acknowledged there was fighting, although it was not clear who was involved.

Communications were cut to the area around Jisr al-Shughour on Monday and the details of the attack were impossible to verify, but there have been unconfirmed reports by activists and residents in the past of Syrians and even mutinous troops fighting back against security forces.

Adnan Mahmoud, the chief government spokesman, acknowledged that Syrian forces had lost control of some areas for “intermittent periods of time” and said residents had appealed to the army to do what was necessary to restore security.

“We will deal strongly and decisively, and according to the law, and we will not be silent about any armed attack that targets the security of the state and its citizens,” said Interior Minister Ibrahim Shaar. 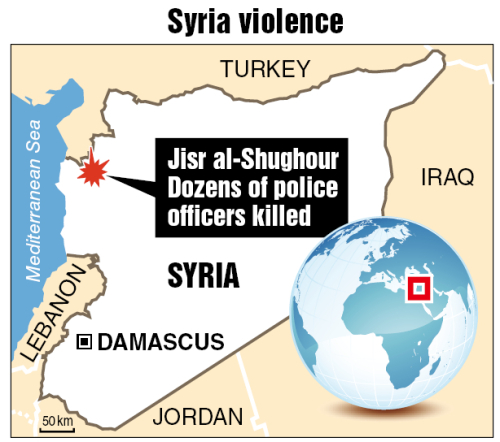 The surprisingly high death toll among pro-regime troops would suggest some sort of major lashback against the crackdown against the uprising ― though by whom was unknown because of the seal over the area. Regardless of who carried out Monday’s attack, it shows new cracks in a rule that has held out through weekly protests of thousands of people.

Human rights activist Mustafa Osso said there were unconfirmed reports of a few soldiers who switched sides and were defending themselves against attacking security forces, but he said the reports suggest the mutiny is limited and “does not pose a threat to the unity of the army yet.”

“The protesters have so far been peaceful and unarmed,” said Osso.

He said there were fears the army was preparing a major attack.

Before Monday’s killings, the government and some human rights groups have said more than 160 soldiers and security forces had died in the uprising. The latest deaths marked by far the deadliest single strike against them.

The government’s unusual admission of the death toll and loss of control appeared to set the stage for an even stronger action to crush a popular uprising that began in mid-March and poses a potent threat to the Assad regime.

State television added the armed groups carried out a “real massacre,” mutilating some bodies and throwing others in the Orontes River.

Jisr al-Shughour, about 20 kilometers from the Turkish border, has been the latest focus of Syria’s military, whose nationwide crackdown on the revolt has left more than 1,200 Syrians dead, activists say. The town was a stronghold of the country’s banned Muslim Brotherhood in the 1980s. Human rights groups said at least 42 civilians have been killed there since Saturday.

Syria’s government has a history of violent retaliation against dissent, including a three-week bombing campaign against the city of Hama that crushed an uprising there in 1982. Jisr al-Shughour itself came under government shelling in 1980, with a reported 70 people killed.

Assad’s decision to allow pro-Palestinian protesters to storm the Israeli border twice in recent weeks indicates he may be trying to deflect focus from a serious crisis at home, and possibly divert international attention from a new crackdown.

State television broadly carried Sunday’s protest at the Golan Heights to the south frontier, which left as many as 23 people dead in fighting with Israeli forces, but it has not carried any footage of the protest, crackdown or ambush at the northern edge of Syria.

Monday’s state television report said the officers were ambushed as they responded to calls from residents for protection from the armed groups. It said 20 policemen were initially killed, and then the groups blew up a post office and attacked a security post, killing other forces.

The report said the armed groups were hiding in homes and firing at security forces and civilians alike, using residents as human shields.

The TV reports could not be independently confirmed. The Syrian government has severely restricted the media and expelled foreign reporters, making it nearly impossible to independently verify events.

Details of the operations in Jisr al-Shughour and nearby Khan Sheikhoun have been sketchy and attempts to reach residents of the town were unsuccessful.

Ahead of Monday’s report, another activist said gunmen had successfully kept security forces out of the area, but he had no details. Fearing retaliation, the activist requested anonymity.

A prominent activist in touch with a resident of Jisr al-Shughour said: “There are dozens of people killed and they are a mix of civilians, police and security forces in the past 24 hours.

“There are reports that security forces took a beating and there is armed resistance keeping them on the edges of the town,” he said.

Amnesty International criticized Syria’s “brutal treatment of protesters” and called on the UN Security Council to condemn the killings and refer Syria to the International Criminal Court.

“Those responsible for the brutal crackdown of pro-reform protesters must no longer be allowed to get away with murder,” Philip Luther, Amnesty’s deputy director for the Middle East and North Africa, said in a statement Monday.