“With the BMW 328 Hommage, we wish to pay homage to the passion and inventiveness of the fathers of the BMW 328”, said Karl Baeumer,CEO of BMW Group Classic, at the unveiling of the show car at the exclusive Villa d’Este Concours event in Italy. 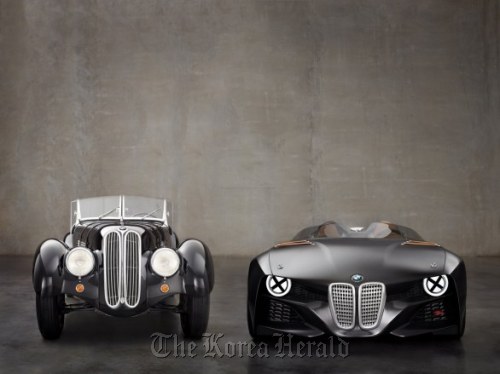 The flat-shaped modern version of the 328 only bears resemblance to the classic with an asymmetric windscreen, elongated BMW grille and leather bonnet straps.

Major parts of the exterior and interior of the BMW 328 Hommage are made of carbon fiber reinforced plastic compared to aluminum and magnesium in the classic.

According to BMW, the new CFRP material offers the best ratio between weight and stability because it is lighter than aluminum and more stable.

Precise lines run across all of the car body’s taut surfaces, providing a subtle contrast between the tense surfaces and the sharp edges within the flat, dynamic silhouette. Scoops behind the seats take up the lines coming from the bonnet, guiding them dynamically to the rear.

Looking at the interior fine leather, matt and high-gloss black polished aluminum as well as the CFRP interior emphasize the functional roadster character.

Other interior details are derived from motor racing in a hint to the original namesake that celebrated its debut on the race track in 1936. The slightly asymmetrically designed windscreen has a recess in the middle, similar to the windscreen design of earlier racing cars. It also marks the areas in which the driver and co-driver sit.