By 박한나
Published : May 29, 2011 - 18:46       Updated : May 29, 2011 - 18:46
KABUL (AP) ― A Taliban suicide bomber wearing a police uniform blew himself up inside a heavily guarded compound Saturday as top Afghan and international officials left a meeting, killing two senior Afghan police commanders and wounding the German general who commands coalition troops in northern Afghanistan.

Two German soldiers and two other Afghans were also killed in the blast, the latest in an insurgent spring offensive. It came just weeks before a planned drawdown of U.S. troops begins this summer.

The bomber detonated his explosives-laden vest inside the governor’s complex in Takhar province, where high-ranking Afghan officials were meeting with members of the international coalition, said Faiz Mohammad Tawhedi, a spokesman for the governor.

“What we know is the guy who carried out the attack had a police uniform on,” Tawhedi said. “How he entered the meeting room and why he was not searched, we don’t know.” 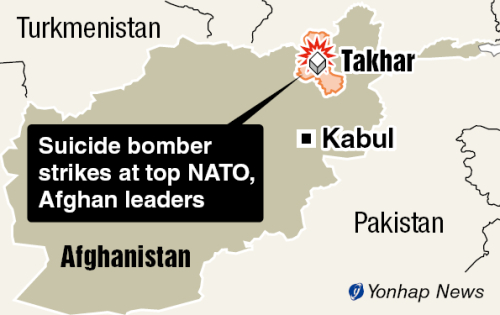 Among the dead was Gen. Daud Daud, regional police commander in northern Afghanistan, according to the provincial health director, Dr. Hassain Basech.

Daud was a former deputy interior minister for counternarcotics and a former bodyguard of Ahmad Shah Massoud, the charismatic Tajik leader who commanded the Northern Alliance and died in an al-Qaida suicide bombing two days before the Sept. 11, 2001, attacks that provoked the U.S. invasion.

He was named chief of the northern zone police, which covers the nine northern provinces from its headquarters in Mazar-i-Sharif, about a year ago, at a time when security in northern Afghanistan was steadily deteriorating.

Also killed were provincial police chief Gen. Shah Jahan Noori, a secretary to the governor and one of Daud’s bodyguards, the health director said.

Earlier this year, Kneip took over NATO’s northern regional command, which covers nine provinces on Afghanistan’s border with Pakistan, Tajikistan, Turkmenistan and Uzbekistan. He also serves as the senior national commander of the 4,900 German troops deployed in the north, a region that had been relatively calm but has seen a rise in violence over the past two years.

Two German troops were killed and two others were wounded in the blast, de Maiziere said. Fifty-one German troops have been killed in Afghanistan since the start of the war.

“The attackers and their superiors are criminal murderers,” de Maiziere said. “They should not and will not have the last word. We will not leave the path of partnership. However, it is a steep and bitter price.”

German Chancellor Angela Merkel also condemned the attack, saying in a statement that she was “shocked and sad about the dead and wounded German soldiers as well the many Afghan victims.” The chancellor demanded a thorough investigation to find and punish the perpetrators.

Abdul Jabar Taqwa, the Takhar province governor who was at the meeting, suffered burns to his head, hands and back. Nine other Afghans were wounded, including a cameraman working in the governor’s office and eight Afghan troops.

The Taliban claimed responsibility for the bombing ― the latest in an uptick of violence since the Islamic extremist movement launched its spring offensive on May 1. The effectiveness of the Taliban’s campaign could affect the size of President Barack Obama’s planned drawdown of U.S. troops, beginning in July.

Taliban spokesman Zabiullah Mujahid said it was part of the insurgency’s assassination campaign against high-ranking government officials and was meant to undercut a military offensive he said the Afghan National Army was planning to launch in the north.

Violence has been on the rise in the north, where the Taliban, al-Qaida and fighters from other militant factions are known to be hiding, including the Haqqani network, Hezb-i-Islami and the Islamic Movement of Uzbekistan. In October 2010, a bomb killed Kunduz Gov. Mohammad Omar and 19 others in a crowded mosque in Takhar province. Omar was killed just days after he warned of escalating threats from Taliban and foreign fighters in the north.

President Hamid Karzai condemned the attack, calling it a “barbaric act of terror.”

The suicide attacker struck at 4:45 p.m. as top officials walked out of their meeting, a senior Afghan police officer told The Associated Press, speaking on condition of anonymity because he was not permitted to talk to journalists. There was a flash of fire and people started running in all directions, he said. After that, the room went dark and white smoke billowed from the compound.

AP Television News video showed the aftermath of the powerful blast: Windows and doors were blown out and black scorch marks marred much of the building. Blood was spattered on paving stones in the parking lot and the sound of soldiers stepping through shattered glass could be heard.

Nine other Afghans were wounded ― a cameraman working in the governor’s office and eight Afghan troops.

The Afghan police officer said Afghan and international officials had been discussing security issues and ways to prevent another massive protest in the northern province, where security has deteriorated as NATO and Afghan forces focus on insurgent strongholds in the south.

Last week, 12 people died in a protest in Taloqan after four people were killed in a night raid conducted by NATO and Afghan forces.

NATO said those killed were four insurgents ― including two women ― who tried to fire weapons at the joint force. Protesters, however, carried the bodies of the dead through the provincial capital, claiming they had been gunned down in their home for no reason. An estimated 1,500 people later clashed with police and tried to storm a German military base, shouting: “Death to Karzai! Death to America!”

The riot foreshadowed more trouble ahead for NATO as upcoming troop drawdowns are likely to make the alliance increasingly reliant on quick-strike raids on insurgent hideouts. The raids often produce prominent results ― most recently, the May 2 killing of Osama bin Laden in neighboring Pakistan ― but deeply offend Afghans when they go wrong.

The Afghan public, which has grown increasingly hostile to foreigners as the nearly decade-long war continues, tends to perceive the NATO raids as capturing the wrong people or mistreating civilians during searches of private homes and compounds.

Fighting back against these operations, Karzai on Saturday ordered that only Afghan troops ― not NATO forces ― should carry out special operations and night raids. The president’s move was aimed at quelling popular anger over the international troops’ nighttime assaults that he says kill innocent Afghan civilians. The announcement also said the international coalition should not conduct any raids that have not been coordinated beforehand with Afghan authorities.

It wasn’t immediately clear what impact, if any, Karzai’s orders would have on NATO’s actions.

The coalition promptly defended the raids as a necessity to flush out insurgents from their hideouts.