The revival of the Mediterranean Sea

By 최남현
Published : May 25, 2011 - 19:16       Updated : May 25, 2011 - 19:16
MADRID ― The Mediterranean is undergoing a monumental political transformation. Protests on its southern shores have now begun the process of bringing democracy to this region. Less visibly, perhaps, the Mediterranean is also undergoing another revival, equally important in terms of geo-economics. 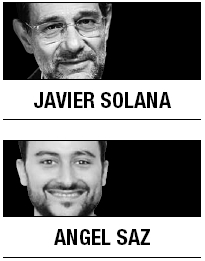 The changes in the world’s balance of power from the West to the East, from the Atlantic to the Pacific, is making both the United States and Europe apprehensive. Their loss of geopolitical and economic power is evident. Although the future geopolitical behavior of the rising new powers ― Brazil, China, and India ― remains uncertain, this shift may nonetheless provide an opportunity for the Mediterranean.

With the world focused on the West, the Atlantic region dominated the last three centuries. In a world focused on the East, however, the main linkages are the Pacific and Indian Oceans and, given today’s close relationship between Asia and Europe, the Mediterranean Sea.

Indeed, the container traffic between the Far East and Europe now totals 18 million TEUs (twenty-foot equivalent units) per year, compared to 20 million TEUs of annual Trans-Pacific traffic and just 4.4 million TEUs of Trans-Atlantic flows between Europe and America. The container flow between the Far East and Europe uses the Mediterranean route via the Suez Canal ― far faster than passing through the Panama Canal, circumnavigating Africa, or even taking the hypothetical (for now) ice-free Arctic route.

In other words, most ships from the Far East enter the Mediterranean via the Suez Canal and sail straight past Genoa, Marseille, Barcelona, and Valencia, adding three days to the trip to reach Rotterdam or Hamburg. Unloading at an Atlantic port instead of a southern European port thus entails substantial additional financial and environmental costs, eroding Europe’s competitiveness.

Indeed, according to one study of the Port of Barcelona, the optimal distribution of container flow in economic and environmental terms would be 37 percent to the northern European ports and 63 percent to those in Southern Europe, given the final destination and origin of imported and exported goods. Based partly on the European Environment Agency’s methodology, the study concludes that a redirection of port traffic to the southern European ports would reduce the CO2 emissions by almost 50 percent.

Of course, such a rebalancing is unthinkable today, for both political and economic reasons. After all, the current imbalance in container traffic reflects northern Europe’s economic dynamism, the efficiency of its ports, excellent road and rail infrastructure to connect those ports to virtually all of Europe, and the economies of scale generated by the volume of goods that passes through them. But, given that container traffic is expected to increase by 164 percent before 2020, southern European ports should be able to increase their share in flows between Europe and the Far East by 40-50 percent.

To achieve this rebalancing, southern European ports need improved support infrastructure, specifically rail links connecting them to the main European rail network. The Trans-European Transport (TEN-T) policy, which the EU is currently revising, is fundamental in this respect, because it is the master plan that will guide the development of the basic European infrastructures.

Although this infrastructure is financed mainly by individual EU member states using their own funds, the TEN-T is binding and marks out the priority projects for each member. Thus, it is absolutely essential for TEN-T to reflect the importance of rail connections for the southern European ports.

In order to ensure this, policymakers must give priority to the efficiency criterion and bear in mind the environmental costs of both land and sea transport. If Europe and its companies are to remain competitive and attain the strategic objective of “Europe 2020” ― a Europe that uses its resources efficiently ― the Mediterranean rail transport infrastructure is vital.

Obviously, there is another, geopolitical condition that must be met to achieve this rebalancing: the Suez Canal must continue to be a safe and reliable shipping route. Any threat to the canal’s normal operations would shift the Far East-Europe route to the southern tip of Africa, marginalizing the Mediterranean (and sending costs soaring).

The Mediterranean played a crucial role in the first Egyptian and Mesopotamian civilizations, was the sea of the Phoenicians, Greeks, and Romans, and was the center of the world first for the Arabs and Barbarians, and later for the Ottomans and the Spanish. Today, having faded as a result of advances that opened up the Americas and the East to European trade, the Mediterranean has a great opportunity to recover its lost prestige.

By Javier Solana and Angel Saz

Javier Solana, formerly the European Union’s high representative for foreign and security policy, and a former secretary general of NATO, is president of the ESADE Center for Global Economy and Geopolitics (ESADEgeo). Angel Saz is coordinator of ESADEgeo. ― Ed.