In November 1969, Kim Young-sam, then an opposition lawmaker, announced his intention to run in his party’s presidential nomination race, using the slogan “40-something standard bearer.”

The announcement by the then 43-year-old Kim took aback the New Democratic Party’s aged leadership, which had posed no serious challenge to the rule of President Park Chung-hee, who had seized power in a military coup in 1961.

Party leader Yu Jin-san, a seasoned politician then aged 64, and other senior party members ridiculed Kim’s move as “smelling of a baby.”

But they soon saw the tide turning in favor of generational change in leadership as two other ambitious lawmakers in their 40s ― Kim Dae-jung, 45, and Lee Chul-seung, 48 ― declared their own presidential bids.

With the party head being pushed out of the race, the three lawmakers vied for the presidential nomination in the NDP convention in September 1970. Securing last-minute support from Lee, Kim Dae-jung came from behind to defeat front-runner Kim Young-sam in a run-off by winning 485 votes from delegates against 410 for his rival.

Kim Young-sam, who had spent the previous night writing an acceptance speech, conceded his defeat clearly, saying, “Mr. Kim Dae-jung’s victory is our win and my win.”

In the presidential election in April 1971, Kim Dae-jung faced then-President Park who was running for a third time after revising the Constitution that had bound him to two four-year terms. With his eloquent speeches harshly criticizing Park’s rule for undermining democracy, he drew huge crowds of voters to his campaign rallies. He lost the election by a margin of less than 1 million votes, prompting his supporters to claim he might have been the winner without vote rigging by the Park government.

Kim Young-sam kept his promise to campaign for his party’s presidential runner around the country. One of his aides later recalled seeing him crying at an inn in a provincial city he was visiting to help rally support for Kim Dae-jung.

The 1970 face-off between the two Kims, which marked the start of their decades-long rivalry and partnership, has been remembered as one of the most dramatic political scenes in South Korea, inspiring some other politicians to take a bold step forward.

But ironically, they had never nurtured a junior politician or allowed one to surpass them until they left the political stage after achieving their goals of putting an end to the military-backed dictatorial rule and serving the nation as president. Kim Young-sam defeated Kim Dae-jung in the December 1992 presidential election, taking the country’s highest elected post at the age of 65. Five years later, Kim Dae-jung, then 73, succeeded in his fourth presidential bid.

Some political commentators say a fair account may be that no politician had dared to challenge the two Kims’ overwhelming influence strengthened by their leading roles in the pro-democracy struggles of the 1970s and 1980s.

No politician under the wings of the two Kims had grown into a heavyweight figure to take over from their boss.

In July 1997, Lee Hoi-chang, a former Supreme Court justice then aged 62, was nominated as the presidential candidate of the New Korea Party led by Kim Young-sam. Lee pressed Kim, who was under fire for a tattered economy and corruption scandals involving his son and aides, to leave the NKP and changed its name to the Grand National Party less than a month before the presidential election which he lost to Kim Dae-jung. Five years later in December 2002, Lee ran for presidency again as a GNP candidate and suffered another defeat to Roh Moo-hyun, then 56, from the Millennium Democratic Party created by Kim Dae-jung.

It was Kim Young-sam who had guided Roh, a human rights lawyer, into the political arena in the late 1980s. But Roh broke with Kim in 1990 when his political mentor decided to join forces with the then ruling Democratic Liberal Party made up of politicians with connections to the past authoritarian regime. Roh later entered Kim Dae-jung’s party and eventually grabbed its presidential ticket, beating the party’s old guards. In his first year in office, Roh created a new ruling party, reducing the MDP to a splinter opposition group and angering its founder who died in 2009, two months after Roh jumped to death amid a corruption probe zeroing in on his family and associates.

The conservative GNP took power by fielding former Seoul Mayor Lee Myung-bak, then 65, in the 2007 presidential poll. Lee won the nomination race against former party leader Park Geun-hye, the eldest daughter of President Park who was assassinated by his intelligence chief in 1979.

With the two Kims’ influence fading, the political circles have been stirred from time to time by calls for generational change in leadership. But no initiatives for changes in the past years ― except for Roh’s unexpected rise to power ― have had such a fundamental impact on the political landscape as the two Kims’ emergence as 40-something standard bearers of their party. 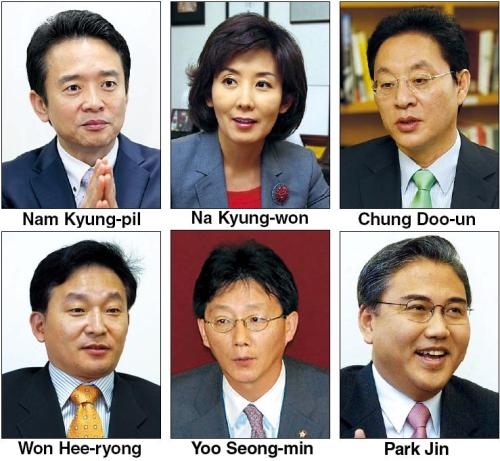 The latest call for a young and reformative leadership erupted in the GNP in the wake of its crushing defeat to the liberal opposition camp in the by-elections last month. The confrontation between reform-minded lawmakers and old guards is expected to intensify in the lead-up to the party convention on July 4 to pick the new leadership.

The struggle for taking the helm of the party is being matched with the ideological strife over its future course, with the reformist group advocating a shift to the center ground and the faction close to President Lee sticking to “conservative values.”

The group of reform-oriented lawmakers recently joined hands with pro-Park lawmakers in electing a neutral figure as new party floor leader over a candidate from the faction loyal to President Lee.

Underlying the simmering internal discord is a sense of crisis that GNP lawmakers may be trounced by opposition challengers in the parliamentary elections next April, clouding its prospects for the presidential poll in December 2012. In a survey of voters early this month, support for the GNP remained slightly above 31 percent, compared to 34.5 percent for the main opposition Democratic Party. Lee’s approval rating, which had hovered above 40 percent, plummeted to 27.3 percent.

But their push for reform is facing backlash from some of the party lawmakers.

Critics say the reformist legislators ― Reps. Chung and Nam in particular ― have used the reform drive only to strengthen their political status, avoiding taking responsibility for the party’s predicament.

“What vision do they have? I wonder whether they have more than political calculations for their own survival,” a senior GNP lawmaker said on condition of anonymity.

Rep. Cho Hae-jin of the pro-Lee faction denounced them for being adept only at laying blame on others. “There is no hope for the party if those who avoid taking responsibility become its leaders,” he said.

In a move apparently reflecting such criticism, Chung said Sunday he would not run for the party leadership post. Chung, who stepped down as a member of the Supreme Council after the by-election, said he had made the decision to take his share of the responsibility for the election defeat. Some commentators, however, see his move as designed to help his colleague Nam be elected to the post of party chairman.

He said undecided voters will support the GNP only when the party walks the path of “centrist reform” to the point of the differences with the main opposition DP being blurred.

Nam and La appear to be measuring the right moment to announce their bid for the top party post.

“I think it is right for young leaders to be in charge as the party is in crisis,” said Nam, a four-term lawmaker who heads the parliamentary foreign affairs and trade committee.

Na, a two-term lawmaker who has been pushing to select party candidates for elected posts in open primaries, said the GNP should choose a figure with a “promising future” as its new leader.

Rep. Won Hee-ryong, a four-term lawmaker in his late 40s, is said to be considering running for the top party post, backed by the pro-Lee faction. Won resigned as party secretary-general after the by-election defeat.

Some political observers also note the pro-Park faction may be pushing to make one of its members ― probably Rep. Yoo Seong-min, 53 ― take the helm of the party in order to prepare the GNP more efficiently for Park’s second presidential bid next year.

Rep. Park Jin, a three-term lawmaker who chaired the parliamentary foreign affairs and trade committee, and other senior party members such as former Supreme Council member Hong Joon-pyo and ex-floor leader Kim Moo-sung are also gauging their chances of winning the leadership race.

Some GNP presidential hopefuls have called for a revision of the party rule obliging top post-holders running for presidency to step down at least a year and a half before the next presidential election. Rep. Chung Mong-joon and Gyeonggi Governor Kim Moon-soo have backed the proposal, hoping to boost their status as presidential challengers by taking the helm of the party.

But former party leader Park, who has kept the highest approval rating among potential GNP presidential runners, made her objection to the revision clear during her meeting with party floor leader Hwang Woo-yea last week, in a move seen to leave the space for the reformist group to take over the party leadership.

Political observers say it is yet to be seen whether any of the GNP lawmakers leading the ongoing reform drive will heighten their political stature to make a successful or at least impressive presidential bid five years on in competition with Seoul Mayor Oh Se-hoon and other presidential contenders within the party.

“The lawmakers who are now taking self-assumed roles as young reformist leaders have not yet given the assurance of going as far as to launch a serious presidential challenge,” said an aide to a senior GNP legislator on condition of anonymity. “My impression is that most of them are imposing a self-defeating limit on their future possibility.”

Calls for leadership change in the opposition fold have been subdued as DP Chairman Sohn Hak-kyu is consolidating his stance as presidential contender after his win in last month’s parliamentary by-election in a GNP stronghold on the outskirts of Seoul. Former Gangwon Governor Lee Kwang-jae said in a recent interview with a local daily that he saw promising opposition figures now in their late 40s ― South Chungcheong Governor Ahn Hee-jung, South Gyeongsang Governor Kim Doo-kwan and Incheon Mayor Song Young-gil ― as likely competitors for the presidential ticket in 2017.

Like Lee, who was banned from running for an elected post for 10 years after being convicted in January for receiving illicit funds, most of the prospective opposition contenders worked with the late President Roh whose posthumous influence remains strong as demonstrated by the huge crowd commemorating the second anniversary of his death Monday.