The special train carrying Kim entered the Chinese border town of Tumen early Friday, passed through Shenyang Saturday evening and was likely to head towards Beijing after a possible detour to the southeast Sunday, North Korea watchers here said.

“There is a high chance of Kim meeting with Hu in Beijing Sunday evening or Monday,” said Yu Ho-yeol, Korea University professor of North Korea studies.

Pundits including Yu believe Kim’s seventh official trip to China, which coincided with the annual tripartite summit meeting among the leaders of South Korea, China and Japan in Tokyo, may have been timed to play up Pyongyang’s close ties with Beijing. Kim last met with Hu Jintao in Changchun in August last year, three months after the two held summit talks in Beijing in May.

It was not confirmed yet whether the North Korean leader was accompanied by his heir Kim Jong-un, who was expected to travel to Beijing sometime this year for his diplomatic debut as the next in line. 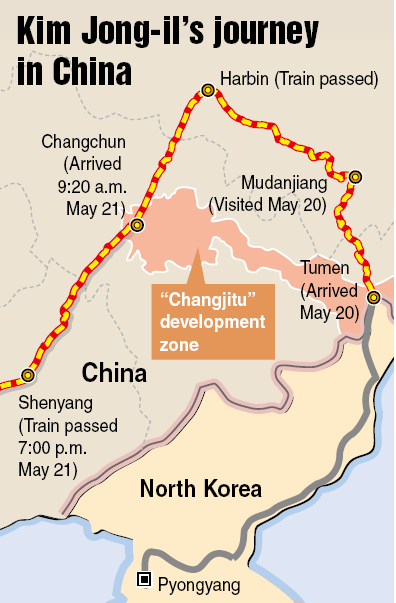 On Friday, Kim reportedly stopped by Mudanjiang in Heirongjiang Province, where a historic site commemorating his father Kim Il-sung is located.

Kim’s special train passed through Harbin early Saturday and arrived in Changchun around 9:20 a.m., where the North Korean leader got off to visit the factory of the First Automobile Works, China’s second largest automaker in sales terms.

On Saturday, Kim’s train left the industrial city of Changchun at around 2:20 p.m. and passed through Shenyang at around 7 p.m.

Yonhap News Agency reported Sunday that the train was headed southeast towards Yangzhou near Shanghai, citing an unnamed Chinese source.

But North Korea watchers here were doubtful of the possibility that Kim might meet with Hu in the Shanghai area.

“If the train is really headed towards Jiangsu Province (Yangzhou), Kim may be making a detour to rest (in his special train) and buy time before Hu can meet him in Beijing after China’s summit meetings with South Korea and Japan in Tokyo,” Yu said.

“But I think the train will go to Beijing so Kim can meet with Hu after China’s official summit talks with South Korea and Japan are over in Tokyo.”

After the three-way summit Sunday morning, Lee held bilateral summit talks with Wen in the afternoon, during which he was told that Beijing invited Kim to give him a chance to witness China’s economic development. Lee was set to leave Tokyo Sunday evening.

Yang Moo-jin, professor at the University of North Korean Studies, also projected that Kim would meet with Hu in Beijing so he can also meet with other members of the Chinese power elite.

“I’m pretty sure Kim Jong-il will meet with Hu in Beijing,” Yang said.

“As for whether Kim Jong-un went to China with his father, there is a 50 percent chance. If Jong-un didn’t go, it was probably to give the young heir a chance to govern the troubled country when his father is away.”

If Jong-un was in China with his father, it meant the 27-year-old would formally introduce himself to the Chinese leadership this time, Yang said.

Neither Beijing nor Pyongyang, however, confirms Kim’s secretive trips to its main provider of aid, even though his presence in China has been photographed by media.

The two countries customarily confirm the leader’s trip only after it is over, apparently due to security concerns.

The English-language sister newspaper of China’s People’s Daily said Saturday that South Korean media reported Kim’s trip to Mudanjiang Friday but that Seoul and Beijing declined to comment on the media reports.

The Global Times also quoted a researcher on Korean issues named Zhang Liankui at the Chinese Communist Party School of the Central Committee as saying that “the North Korean leadership is seeking to boost economic cooperation with China and set the junior Kim up on the international stage.”

Kim’s tour of China’s three northeastern provinces ― Heijongjiang, Jilin and Liaoning ― prior to his expected summit with Hu clearly indicates that Kim wanted to reaffirm that Pyongyang was willing to expand economic cooperation with Beijing.

Kim’s revisits to most of them, this time for an “economic inspection” after having traveled through Jilin, Changchun, Harbin, Mudanjiang and Tumen last August, can be construed as a signal to that intention.

China has called for North Korea’s participation and cooperation as it pushes for its “Chang-ji-tu plan” or development of the area surrounding the underdeveloped Changchun, Jilin and Tumen River by 2020.

It remains to be seen whether North Korea will offer China the exclusive rights to use its seaports of Rajin-Sonbong and Chongjin, which would enable efficient transports of goods from China’s remote northeastern towns to the Pacific Ocean. If granted, the rights would boost the trade of mostly raw materials from the out-of-the-way region, a key goal of the Changjitu scheme. It could be a watershed moment in expanding the two allies’ economic cooperation and increasing the North’s dependence on China.

North Korea and China are also scheduled to embark on an island development project named Hwanggumpyong, along the lower reaches of the Tumen River, later this month.

The construction of roads connecting Hunchun in China and Rajin-Sonbong in North Korea, is also set to begin in May.

High-ranking officials from both countries were expected to visit Dandong and Rajin-Sonbong to launch the border projects.