Value of automobile imports to reach 10% of exports

According to industry data, the value of automobiles imported into the country during the first quarter of the year came in at $1.15 billion while that of exports was tallied at $9.37 billion. The figures include passenger cars, buses and commercial vehicles. 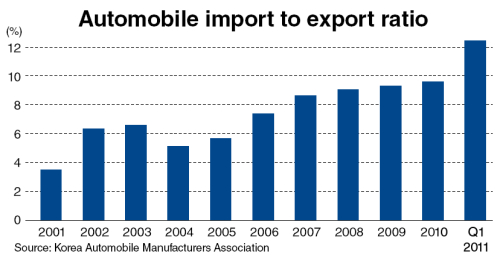 At the current rate, the country’s automobile imports to exports ratio looks likely to break the 10 percent barrier.

Industry sources attributed the rise in imports to high-end models making up larger proportion of imports.

While the automobile imports to exports ratio has in the past risen above the 10 percent mark in quarterly figures, the annual figure has yet to rise above 10 percent.

For all of last year, imported car sales were worth $3.35 billion and that of exports was at $33.59 billion. That meant the ratio fell short of the 10 percent mark by 0.05 percentage points. However, for the first quarter of last year, the ratio pushed past 10 percent with imports being valued at $690 million and exports at $6.89 billion.

With imported vehicles gaining in popularity, the value of Korea’s automobile imports have been on a steady increase in recent years.

In 2001, the ratio stood at 3.7 percent and rose to reach 6.7 percent in 2003. The figure dipped in the following year to 5.5 percent despite the value of automobile imports rising 11.4 percent from 2003 as exports increased by a much larger margin.

In 2004, the value of Korea’s automobile exports jumped 38 percent from the previous year to come in at $24.05 billion.

From 2005, the value of imports has grown steadily pushing up the ratio for 6 percent in that year to 9.95 percent last year, and then to 12.3 percent for the first three months of 2011.