Tina Fey has it all on her funny terms

By 주혜미
Published : Apr 29, 2011 - 18:35       Updated : Apr 29, 2011 - 18:35
Ever since Vanity Fair put her on its January 2010 cover in what looked like a Wonder Woman costume, Tina Fey has seemed in danger of falling for the very canard she has spent a career satirizing: that a woman can “have it all” if she’s willing to lose 20 pounds, show her breasts and regularly remind everyone that, although she writes and stars in an Emmy-winning TV show, she is still essentially a loser who eats a lot of cupcakes. (Just like, you know, Larry David does.) An excerpt from her new book in a recent New Yorker didn’t help, with Fey assuming the position of agonized career mommy ― why do so many people keep asking her if she is going to have another baby when having one is so hard? Fey wonders hysterically, never once considering that these people are Just Making Polite Conversation.

But any concern that Fey, like so many before her, has been ruined by fame is quickly dispelled by “Bossypants,” a book that reminds you why Fey has succeeded where so many have failed ― because she is precise, professional and hilarious. 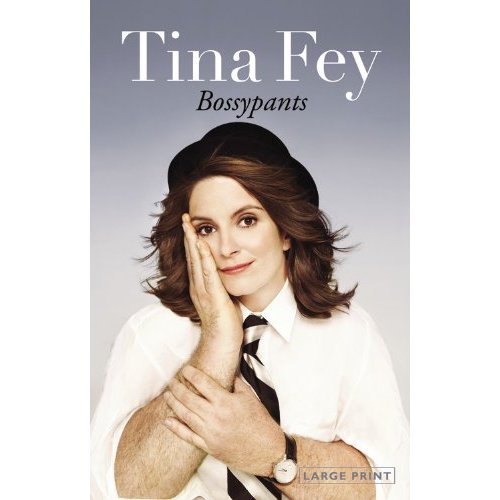 At first, “Bossypants” appears to be just more of the same ― there’s Fey on the cover looking fabulous but not owning it (her airbrushed face is framed by two large and hairy male arms) and the back is filled with fake and self-deprecating quotes regarding her appearance and talent. Pay them no mind; inside lies a collection of autobiographical essays that should (but of course won’t) prove once and for all that pretty is nowhere near as important as funny, and funny doesn’t work without that rare balance of truth and heart.

I didn’t know what was up with the editors at the New Yorker ― why choose to cobble together a piece about Fey’s mommy anxiety instead of lifting the gorgeously rendered, breathlessly funny chapter on her father, or even her life-affirming treatise on photo shoots (“Don’t ever feel inadequate looking at magazines. Just remember every person you see on a cover has a bra and underwear hanging out a gaping hole in the back”), which comes complete with a very persuasive defense of Photoshopping? But then they ran another piece, one about the lessons she learned from Lorne Michaels. Begging another question: How many people in this world have had two chapters excerpted by the New Yorker?

A sidebar on the art of improvisation is as close to intelligent self-help advice as you’re going to get, and her description of an early job at a Chicago Y borders on new journalism.

If nothing else, “Bossypants” should make any profile of Fey unnecessary, since it provides everything readers want from a story about a performer and none of the “clever” observations about food intake/absence of makeup/appearance of child art upon which celebrity profiles are so dependent. In chapter after chapter, in a voice consistently recognizable as her own, Fey simply tells stories of her life: How a nerdy but self-confident half-Greek girl entered theatrical life (a wonderful community theater, lots of gay and lesbian friends), what Second City was like “back in the day” (cultish, hard, unbelievably fun), how “Saturday Night Live” works (a chemical compound of Harvard grads and Improv people), what it’s like to be a woman in comedy (harder than you think but not as hard as coal mining) or to run your own show or to satirize a vice presidential candidate when she’s standing right backstage.

Fey has a great sense of pace and timing ― longer, weightier chapters dealing with her profession and her career are balanced with short pieces on being fat and being thin and some responses to evil email ― and a love of language that echoes early Nora Ephron and, before that, the marvelous Jean Kerr. In her own way, Fey has been doing this all her life. She is a physical personal essayist in that her writing and performing all stem from what she thinks about the experiences she has had. The seams that hold “Bossypants” together are her experiences specifically as a woman; although she is far from heavy-handed, Fey is matter-of-fact about the double standard to which women are still held. That some found her impersonation of Palin “ungracious” is, to her mind, the perfect example: Palin, she argues, is not fragile and she, Fey, is not mean.

Nor does she come across as a diva, even of the professionally self-deprecating variety (see: Joan Rivers). She writes with genuine love and appreciation of all her costars, especially Alec Baldwin and Amy Poehler, and devotes an entire chapter to “30 Rock’s” writers, complete with the inclusion of best episodes and scenes.

That she manages to completely avoid a memoir’s biggest pitfall ― oblivious narcissism ― is proof enough that a sense of humor is crucial to most storytelling. Even the rather horrifying genesis of the scar on the left side of her face ― as a kindergartener, she was slashed by a stranger in the alley behind her house ― becomes not a fetishized symbol of “otherness” but a reverse tell. You can judge a lot from a person by how she deals with a noticeable scar.

But no one is going to pick up “Bossypants” to dissect Fey’s precise use of tempo and language or to analyze her true commitment to the writers’ room. People will buy it in hopes that it is funny, and that it is, my friends, that it is. Amazingly, absurdly, deliriously funny. Everything you would hope for from this book ― it’s impossible to put down, you will laugh until you cry, you will wish it were longer, you can’t wait to hand it to every friend you have ― is true. Oh, the agony and the ecstasy of encountering the real deal. Because even with the stupid cover girl shots, the wearisome I’m-just-the-coat-rack-to-Alec-Baldwin’s-Astaire attitude, even with predictable airing of midlife mommy issues, Tina Fey remains, finally, inarguably and mercifully All That.