A South Korean container vessel carrying 20 people is very likely to have been hijacked by pirates as it was traveling some 460 miles off the Somali coast Thursday, the Foreign Ministry here said.

The 75,000-ton Hanjin Tianjin lost contact around 5:15 a.m. while traveling from Spain to Singapore with 14 South Koreans and six Indonesians aboard, and remains out of contact, the ministry spokesperson said in a regular press briefing Thursday.

“We are presuming the ship was hijacked as it remains out of contact up to this moment,” ministry spokesman Cho Byung-jae said.

The South Korean government maintains firm not to negotiate with pirates in any case, the spokesman added.

“No changes will be made to this internationally coordinated principle under any circumstances,” he said. 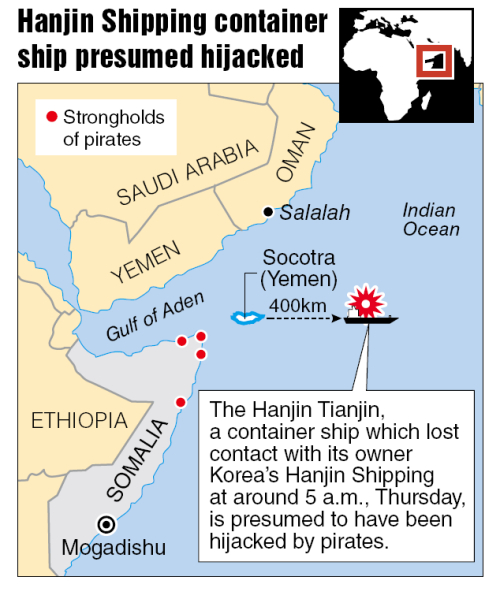 The hijacking, once confirmed, will mark the first such case since South Korea’s 11,500-ton chemical freighter Samho Jewelry and its 21 crew members were rescued in January by the Navy in a blitzkrieg days after it had been seized in waters between Oman and India.

A South Korean warship, operating off the Somali coast as part of U.S.-led multinational anti-piracy efforts, is currently on its way to the scene where the container had made its last contact, the Defense Ministry said.

The ministry, however, refused to elaborate further on the whereabouts of the 4,500-ton destroyer Choi Young, citing safety reasons.

“The Navy is doing its best to take control of the situation. Please bear with us on the need to keep the location (of the warship) hidden for the safety of the crew as well as for a successful operation if one is necessary,” Col. Lee Bung-woo, a spokesman at the South‘s Joint Chiefs of Staff told reporters.

Another senior official at the Foreign Ministry said Hanjin Tianjin was equipped with a water canon and other means to “protect itself from hijackers to a certain extent.”

“The ship also has a shelter space where the crew can keep themselves hidden from hijackers,” the official said on the condition of anonymity.

Hanjin Shipping Co., which owns the vessel, said it was striving to figure out the situation at an early date.

“The Hanjin Tianjin is presumed to have been attacked by Somali pirates,” a company official said on the condition of anonymity. “We are trying to confirm the situation together with related government ministries.”

The drop would only be temporary, analysts said, citing the fact the presumed hijacking would not influence the firm’s overall profitability.

Dozens of South Korean vessels have fallen victim while sailing the pirate-infested Somali seas in the past.

Critics have pointed out the country’s ships become easy targets due to bad precedents in which the pirates’ high ransom demands were accepted.

Five Koreans and 19 Filipinos who were aboard the 319,360-ton South Korea-owned Samho Dream were only released last year after paying at least $9.5 million in ransom.

Samho representatives admitted having paid a large amount of money to ensure the safe return of its employees, but refused to elaborate on the exact amount.

The South Korean government does not take direct part in negotiating with pirates, keeping to the international principle not to bargain over a hijacked vessel.