By 김주연
Published : Apr 21, 2011 - 18:50       Updated : Apr 21, 2011 - 19:38
The central bank and the financial regulator decided to jointly examine banks’ foreign currency trade activities to keep them in check against speculative investments. The inspection comes as the won this week advanced to its strongest level in 31 months with capital inflows into local assets.

The market’s understanding of the latest move is that the Finance Ministry is masterminding regulators to curb the steep rise of the won which is harmful for exporters. 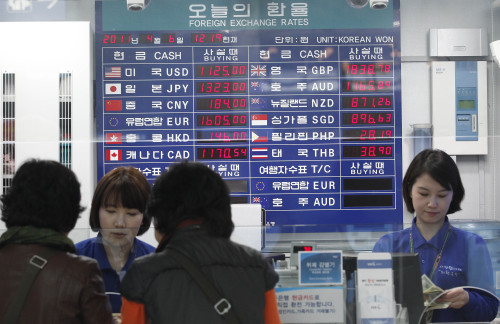 “We detected a growing size of speculative investments through hedge funds recently,” an official familiar with the matter said.

The Bank of Korea and the Financial Supervisory Service said they will begin the inspection of major banks to see if they are abiding by the limits on foreign currency derivative contracts introduced last October. Banks subject to the examination include Korea Development Bank, Export-Import Bank of Korea, Industrial Bank of Korea and Korea Finance Corporation.

“Findings from the inspection will be used as reference material when Seoul decides whether to adjust the ceilings on foreign exchange derivative trade,” the Finance Ministry said. The inspection will start on Apr. 26 through to May 6.

As the surge in fund inflows raises the value of the currency against the major currencies and lifts upward pressure on domestic inflation, Seoul has been imposing a series of capital control measures since last year.

In June, the Finance Ministry put limits on banks’ positions of currency forwards and cross-currency swaps to prevent hot money being channeled into those derivative products. It included restricting the amount of currency forwards deals by foreign banks to 250 percent of their equity capital.

In November, Seoul re-imposed a 14 percent withholding tax on foreign investors’ earnings from government bonds. The latest inspection is extension of the first round of examination conducted on banks in October.

“Some additional measures can be introduced after the examination,” a government official said.

Fighting inflows of hot money has been a common concern for emerging markets since the second round of quantitative easing, or QE2, from the U.S. Federal Reserve resumed last year. Such loose policies and near zero interest rates in advanced nations have been driving capital into emerging markets where returns are higher.

“I expect more foreign capital inflows in the coming months although the QE2 is scheduled to expire this June. Some could come from Japan after the Japanese government increases stimulus measures,” Park So-yeon, a market analyst at the Korea Investment & Securities said.