Intelligence officials had said earlier this year they have detected at least two new tunnels at the North’s nuclear test site in apparent preparation for a third atomic detonation following those made in 2006 and 2009.

Pyongyang also unveiled to an outside expert last November what is said to be a sophisticated uranium enrichment facility, sparking regional fears and moves to bring the case to the U.N. Security Council for condemnation. Uranium, when highly enriched, could give the communist state a second way to produce nuclear bombs, in addition to the existing plutonium.

“Yes, there is always a possibility of another nuclear test as (the North) has various nuclear test sites and is also constructing new ones,” Seoul’s National Intelligence Service chief Won Sei-Hoon told a parliamentary session Tuesday.

Pyongyang was faced with the deepest international isolation ever after leaving the six-nation denuclearization talks at the end of 2008 and conducting a second nuclear test.

The North, for decades, has employed a two-track strategy of offering to discuss denuclearization with dialogue partners ― South Korea, the U.S., Japan, Russia and China ― while keeping up its nuclear ambitions. 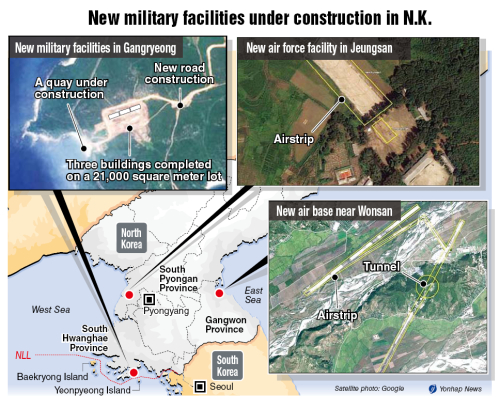 Along with its persisting nuclear activities, the reclusive North appears to be defying U.N. resolutions and carrying out illicit arms trade by employing various secretive methods, according to a U.N. panel of nuclear experts.

Kyodo News reported, citing the panel’s report, that Pyongyang was using “masking techniques” such as “physical concealment, mislabeling, false description of cargo/manifest and consignor/consignee and use of circuitous routes” to bring in nuclear and missile-related arms.

The trade of prohibited goods had taken place via trade offices and even diplomatic missions in various countries, the report said, adding the North has also established links with overseas criminal networks to transport smuggled cargos.

Pyongyang was slapped with two U.N. Security Council sanctions in 2006 and 2009, which forbid the international community from trading arms and luxury goods with the communist state.

The U.N. panel report also claimed the North appears to have been developing the uranium enrichment program for several years or even decades, citing the required time frame of 10-20 years to reach a pilot plant level. Observers have been regarding the uranium program as quite recent.

North Korea has “enrichment-related facilities other than the revealed enrichment plant” and should the revealed facility be operated, it could make 25-33 kilograms of highly enriched uranium, which would be sufficient for making one to two nuclear bombs annually, Kyodo News quoted the U.N. panel as saying.

The unpredictable state may use provocations such as nuclear and missile tests “to turn the table” should it fail to rejoin the six-party dialogue at an early date, South Korea’s spy chief Won said.

Another senior official at Seoul’s Unification Ministry, which specializes in affairs with Pyongyang, said his government was “fully aware and very alert” of such provocation possibilities of the North.

“We have become much used to North Korea’s two-track strategy over the past years,” the official said, asking not to be named as he was not authorized to represent the government on the issue. “I believe the government is maintaining high military alert regardless of dialogue.”

The multinational dialogue aimed at ending North Korea’s nuclear program in return for economic aid has been suspended since December 2008. Pyongyang has been expressing hopes of rejoining the talks since last year.

While being wary of further provocations by the North, which conducted two deadly attacks against the South last year, Seoul and Washington appear willing to resume talks once Pyongyang provides some kind of proof of its denuclearization efforts and regret for the attacks.

Meanwhile, the U.S. slapped sanctions on a North Korean bank Tuesday, Washington time, accusing it of having ties to the arms trade and Iran.

The bank was accused of aiding an arms dealing organization called Green Pine, which has been linked to a top North Korean intelligence agency, the Reconnaissance General Bureau.

The Treasury Department said that in 2007 and 2008 the bank helped Green Pine execute transactions with Iran’s Bank Melli and Bank Sepah, both of which are already under sanctions.